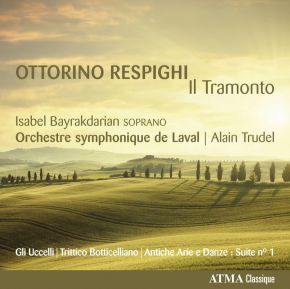 Canadian star soprano Isabel Bayrakdarian is the featured soloist in this recording by the Orchestre symphonique de Laval—its first with current artistic director and principal conductor Alain Trudel - the album is devoted to orchestral works by Ottorino Respighi.

Known for her sparkling stage presence and astonishing musicality, Bayrakdarian joins the orchestra for Respighi’s setting of the lyric poem Il tramonto (The Sunset).

The five pieces that comprise the suite Gli uccelli (The Birds) pay homage to the composers of the Baroque era who took pleasure in musically illustrating various aspects of life — birdsongs, in this case. Trittico Botticelliano (Botticelli Triptych) consists of three symphonic poems inspired by the three most celebrated canvases of the Italian painter Sandro Botticelli. As a composer and musicologist, Respighi was especially interested in early music, and particularly in Italian Renaissance and Baroque works. Antiche Danze ed Ari per liuto, his orchestral Suite No. 1, was inspired by the music of four Renaissance composers.