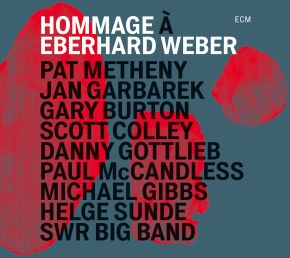 In January 2015 musicians and listeners converged upon Stuttgart’s Theaterhaus for two consecutive nights to celebrate the 75th birthday of Eberhard Weber. The concerts centered around a specially commissioned 35-minute suite by Pat Metheny, with whom Weber had played and recorded back in the 1970s. Featuring Metheny, the SWR Big Band conducted by Helge Sunde, Gary Burton, bassist Scott Colley and Danny Gottlieb on drums, the composition was arranged around recordings of solos by Weber. Other performers during the two nights playing selections from Weber’s vast body of work were Weber’s longtime companions Jan Garbarek, Paul McCandless, and arranger Michael Gibbs, all drawing ovations from the packed house.

01-10-2015 Jazzism
"3***
["]..Weber is praised for his singing, melodic and almost esoteric sound and was therefore an imporant representative of the eighties and nineties ECM sound."