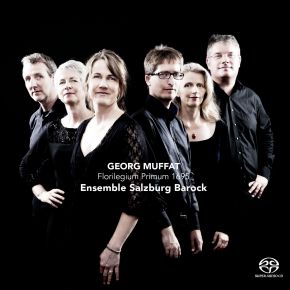 Georg Muffat was born in Megève, Duchy of Savoy, in 1653. We learn about his early training in the preface to his Florilegium primum (Augsburg, 1695), where he states that “for six years, alongside other musical studies” he acquired the French style before “returning to Alsace from France”: he lived in France from 1663 until 1669, studying not only string instruments, but also organ and composition. In his Florilegium secundum (Passau, 1698), he provides detailed instructions regarding performance practice in the French style as it was observed at the court of Louis XIV under Jean-Baptiste Lully. Muffat surmises that he is probably the first composer to have brought the French “ballet compositions and their flowing and natural gait, entirely shunning all other art, intemperate runs as well as frequent and ill-sounding jumps” to Austria and Bohemia, Salzburg and Passau. Transferring from Salzburg to Passau had evidently not been a long-intended aspiration. In the preface to Florilegium primum, a sense of disappointment regarding his Salzburg employer becomes apparent: he expresses his gratitude towards the Passau Prince-Bishop all the more.
Muffat issued the preface to his Florilegium primum in four languages, reflecting his Alsatian origins, the different stages of his life (in Paris, Salzburg, Passau and Rome), as well as his education at the Jesuit Latin schools. The multilingualism, however, also expresses Muffat’s personal avowal to unite the nations with his music: “The weapons of war and their causes are far away from me: notes, strings and lovely musical sounds are my exercise, and since I combine the French manner with the German and Italian styles, I do not incite war, but perhaps help to achieve a desirable concord between with these peoples, playing for dear peace.”
Florilegium primum consists of fifty individual flowers (mostly dance movements), making up seven flower bushes (fascicles, suites), combining into one bouquet (florilegium). Muffat probably composed the suites, possibly even the individual dance movements, independently of each other, combining them only for the printed edition.
The Latin titles of course attract attention. The learnedness of a Jesuit-taught composer provokes thought about their significance. Muffat delivers his music to the listener not only for “amusement” but also for “judgement”: apart from its function as entertainment in the chamber and at the table, as well as providing rhythm for dancing, his music was also intended – on another level – to inspire peace.
The three major key fascicles provide the key to a possible interpretation. With regard to both form and content, Eusebia and Constantia (consistency) constitute a bracket. Emperor Constantius II (337-361) and his second wife, Flavia Eusebia (d.360 AD), were followers of Arianism, a Christian theological teaching which, in contrast to the catholic doctrine of the trinity, only recognised the father as God. Accordingly, Jesus Christ was considered as similar, but not equivalent, to God. Impatientia can be considered a central concept of Greek Stoicism. Thus, alongside the purely secular character of ballet music, theological and philosophical layers are also included. The remaining titles, Sperantis Gaudia [expecting pleasure], Gratitudo, Sollicitudo and Blanditiae [indulgence] broaden the spectrum of a human “frame of mind” and demonstrate that music, of course, is much more than mere diversion. It remains open as to what consequences considering these titles may have for interpreters and listeners. However, ignoring them would be wrong and would not do justice to the universal thinking of the modern era, or to Georg Muffat’s intentions.

Veronika Braß (featured)More information
01-03-2016 Fono Forum
""The Ensemble Salzburg Barock achieves a very plausible reading of the complete bouquet (Florilegium)...""
11-10-2015 HR Audio
"["]..Its leader, Jochen Grüner, and the 5 other members, making up the core of ‘Salzburg Barock’, are all internationally confirmed soloists in their own right. Their experience in historically informed performances is reflected in their playing, which is impeccable.""
01-10-2015 Fono Forum
"While the musicians embellish Muffats keen harmonies and profuse polyphony soundsensually, they almost venture a percussive sharpness in the faster passages"