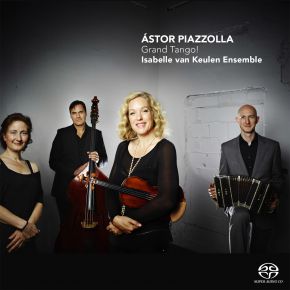 The Bandoneòn player and composer Ástor Pantaleón Piazzolla (born March 11, 1921 in Mar del Plata; died 4 July 1992 in Buenos Aires) is considered the founder of Tango Nuevo, a further development of the traditional Tango Argentino.
Piazzolla has developed his own musical signature, an always personal and unique language, easy to distinguish from the wide variety of 20th century music styles. His great strength was his integrative potential as a composer. Just this sovereignty of assimilation, this picking up of different currents determines his style. The name PiazzoIla stands for extremely exciting and yet sad music, which is still full of energy, sensuality and joie de vivre.
Throughout his life he composed more than 300 tangos and music for nearly 50 films, recorded around 40 records, collaborated with writers and visual artists and cooperated with the Tanztheater of Pina Bausch.
During the military dictatorship in Argentina from 1976 to 1983 Piazzolla lived in ltaly, but always kept returning to Argentina. In particular, the period 1978-1988 is the highlight of his career. During this time, he became very famous with his second quintet: Pablo Ziegler (piano), Fernando Suarez Paz (violin), Horacio Malvicino (guitar) and Hector Console (double bass), also earning great success at home in Argentina. After the end of the military dictatorship, Piazzolla returned to Buenos Aires, where he was named an honorary citizen of the city in 1985, seven years before his death. At the age of 65 he published the impressive late work Tango Zero Hour (1986), the man from Buenos Aires now been regarded as a living legend. In August 1990 he suftered a stroke while in Paris, which made further composing and performing impossible. Piazzolla died two years later in his hometown. Only some time later it was recognized also in Argentina what genius Ástor Piazzolla had. The simultaneous complexity and emotional expressiveness of his works have excited since musicians of ali styles and from all over the world. Unlike traditional tango, Piazzolla’s compositions are not necessarily danceable, on the contrary, they mark a whole new direction of avant-garde music. To Piazzolla Tango is the equivalent of the Allemande or the Gigue to Johann Sebastian Bach. He uses counterpoint and polyphonic voicing, he adds musical elements of avant-garde exploit (bold harmonies, new ways of playing the instruments) He indeed composes music that originates from dance music, but takes it way beyond, as do composers such as Bartók, Ginastera and Villa-Lobos.
“Bandó” is an early composition of Ástor Piazzolla, standing strong in the tradition of classical tangos. The title is a nick name for the “Bandoneòn”, a harmonica instrument that originated in Germany in 1850, came to Argentina with German immigrants and quickly became the typical instrument of tango. In “Otoiio Porteiio” (Autumn) and “Primavera Porteiia” (Spring) are two works from the “Cuatro Estaciones Porteiias”, the seasons in Buenos Aires. Four pieces that adopt the idea of Vivaldi’s seasons, but were originally single compositions, even if they are often performed as a cycle. “Tres Minutos con la Realidad”, three minutes with reality, is a furious, virtuosic work that explores the boundaries of tonality and has clear reminiscences of Stravinsky and Bartók. “Kicho” puts the double bass in the foreground by an extended bass cadenza right al the beginning of the piece. lt was composed by Piazzolla for the double bass player of one of his ensembles, Enrique “Quicho” Diaz, hence the name. “Tango para una ciudad”, Tango for a city is a tribute to the composer’s hometown, Buenos Aires. “Soledad”, Loneliness, is the second piece from the suite “Silfo y Ondina”, which consists of the three parts: Fugata, Soledad and Final. A quiet, contemplative composition with great climax and long musical lines.

The second part of the Isabelle van Keulen Tango-tour in the Netherlands will start on January 20th and go from Zwolle, Eindhoven, Ede, Heemstede,  Oostzaan to Delft. Lots of opportunities to see them play! See the video of 'Tango!' here!

Ulrike Payer (featured)More information
01-03-2016 Luister Magazine
""Listen right away in the first track Bando to the protrusive swinging bass, be amazed in Soledad about the sensitive sighing pino-intro, enjoy the sharp bandoneon cries in, for example, Otoño Porteña and become above all in love with the playing of Isabelle van Keulen""
01-02-2016 Klassieke Zaken
""Right from the first notes of this new cd the game is on, violinist Isabelle van Keulen gives her full vibrato and paints with the sound of her violin."

But what does this CD tell us, when it contains nine pieces by Astor Piazzolla, that not really have any adhesion? A lack of enthusiasm, not to say of craziness? A way of playing this too academic? Or the fact that these new songs are quite similar and that listening to them leaves you being a bit bored. This proves that tango is a complex and subtle music, and its perfect execution requires soul commitment.