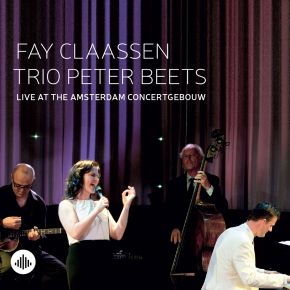 When asked who would be the successor to her throne, the world renowned jazz vocalist Rita Reys always pointed out Fay Claassen as the only Dutch vocalist who would be able to fill her elegantly swinging shoes. Those who know that Rita Reys was once honoured with the title ‘Europe’s First Lady of Jazz’ at the prestigious 1960 Juan-les-Pins Jazz Festival will realise just how important Reys’ kind words have been to a young singer like Fay Claassen. So it was only logical that after Reys’ sad demise in 2013, it was Fay Claassen who teamed up with Rita’s last working band, The Peter Beets Trio, featuring guitarist Martijn van Iterson, bass player Ruud Jacobs and, of course, the swinging virtuoso pianist Peter Beets himself. Their first gig together took place in 2014 at the famous Amsterdam Concertgebouw, a date that was recorded live to capture the spontaneous, pure and thrilling vibe that filled this sacred building of music with the spirit of Holland’s greatest jazz singer ever. For all of those who missed this very special occasion, there is the album Fay Claassen & The Peter Beets Trio live at the Concertgebouw. Claassen and the Trio combine their improvisational skills resulting in an unsurpassed synergy and musicality. From the first note on it is evident that Beets and his men have paid their dues playing superb renditions of the standard jazz repertoire for many years.

Fay Claassen (artist)More information
Various (composer)More information
Martijn van Iterson (featured)More information
Ruud Jacobs (featured)More information
15-08-2016 De Telegraaf
"It was announced as a 'glorious tribute to Rita Reys'.  "
05-08-2016 De Telegraaf
""Swing, beautiful songs and melodies, we are going to make a nice party.""
01-04-2016 Jazzthing
""...it is the subtle musical class of Fay Claassen which makes this Live-Album remarkable.""
01-02-2016 Klassieke Zaken
""Although the pace is sometimes a bit in a hurry so it seems, and for both Claassen as Beets strongly applies that you have to be fond of their virtuoso, lush decorative style, this ode does definitely honor Rita Reys.""
04-01-2016 Villa D'arte
"[...] After Reys passing in 2013, Claassen decided to contact Reys' last band, the Peter Beets Trio. There they established a tourschedule that began with a resounding concert in the Amsterdam Concertgebouw, and this CD was the result. Improvisation, swinging jazz, roaring notes and the hoarse voice of Claassen make for a memorable evening that the momentum is highly maintained. Partly, of course, thanks to classic like 'Just None of those things' and 'Summertime'. [...]"
01-12-2015 Jazzpodium
""But truly impressing is, how deep Fay Claasen noticeably goes on into each single song, to give each song a voice out of its own center.""
21-09-2015 NRC Handelsblad
"['']..Singer Claasen proves herself as Rita Reys' successor.""