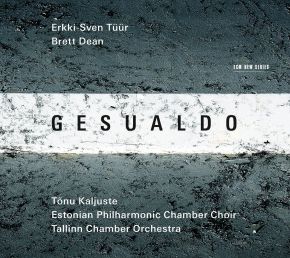 This absorbing project finds Australian composer Brett Dean and Estonian composer Erkki-Sven Tüür drawing inspiration in very different ways from the music, life and times of Carlo Gesualdo, and juxtaposes these reflections with Gesualdo’s own music. Dean’s Carlo (composed 1997) begins with pure Gesualdo from the 6th Book of Madrigals, then gradually enters a very 20th century sound-world. Through use of both sampled and real- time voices as well as increasingly intense strings Dean paints an hallucinatory picture of the Prince of Verona’s state of mind as he is driven toward his violent crimes of passion. Erkki Sven Tüür’s L’Ombra di Gesualdo references the Gesualdo motet O crux benedicta from the Cantiones sacrae, and Gesualdo’s piece is also heard in an arrangement for strings by Tüür. The programme is completed by Tüür’s Psalmody.

The music of Carlo Gesualdo, Prince of Venosa (1566-1613) has exerted a powerful influence on composers down the ages. His highly-charged, mannerist, idiosyncratic vocal music constitutes “a gallery of dramatically-lit portraits of human emotions with a heavy emphasis on the extremes of joy and despair” (to quote former Hilliard Ensemble singer Gordon Jones). Amongst the most experimental and expressive music of its period, it continues to invite reinterpretation and modern responses.
On this album, recorded in Estonia at Tallinn’s Methodist Church, we hear contemporary composition inspired by Gesualdo, as well as new arrangements of his work. The album opens with a radiant version of Moro Lasso from the Sixth Book of Madrigals (1611) in a transcription for string orchestra by Tõnu Kaljuste. This serves to set the scene for Carlo, a major ‘biographical’ piece based on the life and music of Gesualdo, written by Australian composer Brett Dean in 1997. Dean writes, “With Carlo Gesualdo one should not try to separate his music from his life and times. The texts of his later madrigals, thought to be written by Gesualdo himself, abound with references to love, death, guilt and self-pity. Combine this with the fact that I have always found his vocal works to be one of music’s most fascinating listening experiences and you have the premise for my piece.” Carlo takes up the opening chorale from Moro lasso. Then a vocal collage unfolds, and quotes from the madrigal are also taken up and developed further by the orchestra – until we arrive at the sound-world of 20th century music. By “moving between two time-zones” musically, Dean conveys a sense of Gesualdo’s troubled psyche. Carlo was originally scored for fifteen solo strings, sampler and pre-recorded tape, but conductor Tõnu Kaljuste suggested presenting it with live singers. Successful experiments with this in 2002 in Stockholm paved the way for the present recording.

Kaljuste also encouraged the writing of Erkki-Sven Tüür’s string arrangement of O Crux benedicta. The initial motive of this 1603 Gesualdo piece provides the compositional underpinning for Tüür’s L’ombra della croce (2015) for string orchestra. Tüür dedicates the piece to producer Manfred Eicher, “in honour of how he has encompassed both early and contemporary music in the remarkable adventure that is the ECM New Series.”

Psalmody is without a Gesualdo-inspired subtext but it too cross-references older and newer music, within the narrower time-frame of Erkki-Sven Tüür’s own oeuvre. When Tüür wrote Psalmody for the early music ensemble Hortus Musicus in 1993 he was looking back at the music he had composed for his experimental “chamber rock” group In Spe in the period 1979-82, so the piece already incorporated a retrospective element. Tüür revised the work in 2005 and, after a hearing a version by Hortus Musicus with the Collegium Musicale choir, revised it again in 2011. Tüür: “I re-orchestrated the entire score – or rather, I recomposed it, brought balance to the form and made additions to the choral element. This is a unique piece for me…The musical idea behind the composition dates back over thirty years. The latest version essentially represents a sort of minimalism derived from rhythmic patterns and intonations characteristic of various traditions of the European Renaissance and Baroque.”

Following studies in Australia, Dean travelled to Germany in 1985 to join the Berlin Philharmonic Orchestra as viola player. In 1988 he began composing, initially as an arranger, and worked in improvisation for radio and film projects in Australia. His clarinet concerto Ariel’s Music won an award from the UNESCO International Rostrum of Composers. Since 2000 Dean has lived in Australia as freelance composer. Leading interpreters of his music have included Sir Simon Rattle, Markus Stenz, Simone Young, Frank Peter Zimmermann and Daniel Harding. In addition to Carlo, works by Brett Dean include Beggars and Angels (1999) for large orchestra, The Lost Art of Letter Writing (2006) for violin and orchestra, and Bliss (2004–09), an opera in three acts.

Erkki-Sven Tüür studied percussion and flute at the Tallinn Music School. From 1980 to 1984 he studied composition with Jaan Rääts at the Estonian Academy of Music and took private lessons from Lepo Sumera.

In 1979 Tüür founded the rock group In Spe. He was composer, flutist, keyboard player and singer in this ensemble until 1983. From 1989 to 1992 he taught composition at the Estonian Academy of Music. His first success outside of Estonia was in Finland (with Insula deserta, 1989). This led to a continuously growing chain of commissions from major orchestras and outstanding musicians from all over Europe, North America and Australia.

In September 2003 Tüür was composer-in-residence at the Klangspuren Festival (Austria); in 2007 he was composer-in-residence at the Auftakt Festival of the Alte Oper, Frankfurt and 2008 he was composer-in-residence at the Davos Festival. Tüür is one of the artistic directors of the International Festival NYYD in Tallinn and an honorary doctor of the Estonian Academy of Music. He has received numerous awards including the Estonian Music Prize (1987, 1988), Estonian Culture Prize (1997), Baltic Assembly Culture Prize (1998), Annual Prize of the Estonian Music Council (2003) and the Annual Prize of the Endowment for Music of the Cultural Endowment of Estonia (2003 and 2005). Today Erkki-Sven Tüür is a freelance composer based in Tallinn and on the island of Hiiumaa.

CD booklet for Gesualdo includes notes on the compositions by Erkki-Sven Tüür and Brett Dean.

04-11-2015 Volkskrant
"“With his (Erkki-Sven Tüür’s) subtle instrumentation he smoothens a lot of the fierceness, but sometimes there is that wry glittering - a spark that is transported very sharply into our own time.""
02-11-2015 Luister
"''When you do not attach too much value to the historical correctness, but iare searching for pure musical magic from centuries ago, then you are on the right spot with this album.''"