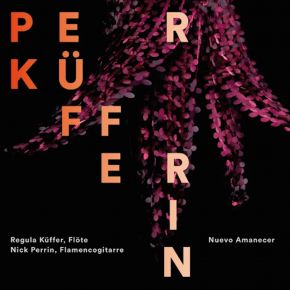 A flute and a guitar – that’s all the duo of Regula Küffer and Nick Perrin need to create a whole world on the boundary between flamenco and jazz. The two virtuosic and highly creative musicians from Switzerland have claimed this frontier as common ground for themselves.

The "classical flautist" Regula Küffer had already discovered her passion for jazz both before and during her studies at the music academies of Bern and Geneva, and remains free from reservations when it comes to good and challenging music of any genre.
Guitarist and composer Nick Perrin can look back on jazz guitar studies at the Bern University of Music and Theatre. Since 2006, he has dedicated himself to flamenco and its connections with jazz. Common to both is a deep conviction, sparked by the joy they find at the alleged limits of musical discovery, and a love of improvisation.

Küffer and Perrin have worked together now for two years; a partnership which they owe to the vision and commitment of their fellow musician Matthias Wenger, who was also responsible for the production of their debut album Nuevo Amanecer.

All ten of the pieces on this album were written by Nick Perrin. His compositions are characterised by the fact that their precise interpretation and improvisational freedoms are mutually dependent.

"For this reason, it was important for us to create a recording setting which met our requirements. With our producer Matthias Wenger, we have found a partner with whom it was possible to record in an environment as true to live as possible. All of the compositions were recorded live in this way during a two-day session at the Friedenskirche (Church of Peace) in Bern” said Perrin, describing the recording process.

All of the compositions on Nuevo Amanecer are based on flamenco, that is, they are characterised by so-called "palos" (listed in the CD booklet after the track titles). Each palo has its own temperament as well as thematic, historical and geographical background. They subsequently follow different styles based on predetermined harmonic, melodic and rhythmic structures. Within this framework, however, there is wide-ranging compositional and interpretive freedom.

Expanding on his jazz background, Nick Perrin goes one step further and makes use of additional harmonic patterns that stand apart from traditional flamenco. Originally a "classical musician”, Regula Küffer has a plethora of instrumental sounds at her disposal, which she adds with great interpretative and improvisatory relish into the overall sonic spectrum.

Nuevo Amanecer from Duo Küffer/Perrin - an exciting musical frontier which unites the fire and depth of flamenco and jazz!