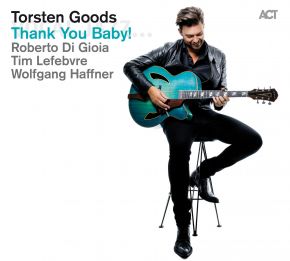 Torsten Gutknecht was born in 1980 in Düsseldorf, the son of a German father and an Irish mother. The family moved to Erlangen, Germany, where Torsten grew up. Thanks to his mother’s well- stocked record collection, which included Irish folk songs alongside jazz greats ranging from Duke Ellington to Oscar Peterson, Gutknecht found an early access into the world of jazz. His first steps as a guitarist, however, were typically influenced by rock and pop. When he was 14 Gutknecht began to study in earnest. At the age of 17 he found a teacher who could instruct him in the intricacies of improvised music, the acclaimed guitarist Peter O’Mara. Torsten was 17 at the time, and his talent and enthusiasm were obvious. This quickly helped to get him into master classes with some of the greats of the guitar fraternity. While he was still in school he attended workshops given by Jim Hall and John Scofield in New York, and took lessons with the virtuoso gypsy guitarist Bireli Lagrene in Strasbourg, France. This last experience was a major influence on his development. In 2001 as a 20 year old Gutknecht travelled to New York with a stipend to study at the prestigious New York New School where he studied with Jack Wilkins and Vic Juris. But it was even more important for Torsten to plunge into the musical life of the "Big Apple". He worked with Seleno Clarke, Barbara Tucker, Reverend Run (from Run DMC), and met George Benson, a major influence who inspired Gutknecht to sing along with his playing. He was also able to perform with guitar legend Les Paul, who also gave him his artist name "Torsten Goods". Before his stay in New York, Goods had been working with no less energy and determination in Germany. In 2000 he became a member of the German Youth Jazz Orchestra under the direction of Peter Herbolzheimer, and shortly thereafter – before his graduation – he recorded the first album under his own name, in 2001, "Manhattan Walls" (Jardis), with Tony Lakatos, Davide Petrocca, Dejan Terzic, Guido May, Jan Eschke, Andreas Kurz, and Rick Keller. In 2004 there followed "Steppin" (Jazz4ever). His band at that time, which consisted of Jan Miserre, Marco Kühnl, and Christoph Huber, was augmented by crack German players Olaf Polziehn, Martin Gjakonovski, Dejan Terzic, Tony Lakotos, Johannes Enders, and Lutz Häfner. The album was nominated for the German Record Critics’ Award, and international critics acclaimed Goods as an "emerging new force in the jazz scene". Shortly after, in 2005 Goods was the only European to be chosen by Herbie Hancock and Wayne Shorter for the final round of the "Thelonious Monk Jazz Guitar Competition" in Washington D.C. Since then Torsten Goods has been touring extensively throughout Europe, Asia, and the USA. During this period he has worked with the likes of Bob James, Chris Potter, James Genus, Terri Lyne Carrington, Barbara Tucker, Dawn Tallman, Marcus Fugate, Jimmy Bruno, John Ruocco, Johannes Faber, Leszek Zadlo and Patrick Scales. In 2006 Goods began to work exclusively as an artist for ACT. His ACT debut, "Irish Heart" (ACT 9714-2) on which he delves into his Irish roots, marked a decisive breakthrough: not only did it introduce him wider public, first and foremost he became recognized as a singer. Goods is not only equipped with a virtuoso guitar technique – he also has an exceptionally sensitive and expressive singing voice that is at home with the blues as well as swing and pop. The "Irish Heart" tour took him through not only Germany, it also brought him invitations to some of the major European festivals such as the Paris Jazz Festival, Jazz Baltica, the Leverkusen Jazz Days, Burghausen Jazz Weeks, JazzKaar Estonia, the Pure Jazz Festival in Den Haag, the Traumzeit-Festival and Competitions in Brussels as well as the London International Jazz Competition, the Montreux Jazz Guitar Competition, and the European Guitar Award in Dresden. With his second ACT album, "1980" (ACT 9719-2), Goods once again substantially extends the range of his music. With adaptations of the works of outstanding artists from 1980 (the year Goods was born) along with his own compositions, Goods follows on the tracks of such great jazz guitarists and singers as Al Jarreau and Michael Bublé. In June 2013 the long-awaited fifth album "Love Comes To Town" (ACT 9726-2) was released on ACT. The new CD was produced by Nils Landgren. Besides him other well-known guests like Till Brönner, Wolfgang Haffner, Magnus Lindgren, Ida Sand and Viktoria Tolstoy appear on the album. On "Love Comes To Town" Torsten Goods refers to his musical roots in blues, jazz and R&B while simultaneously focusing on the future as a matured artist. The album was well received in Germany for its groovy pop jazz-sound that was even compared to George Benson.