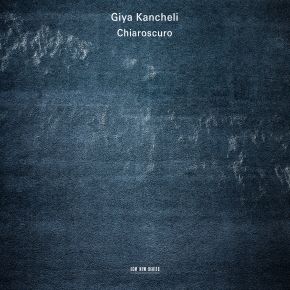 The great Georgian composer’s twelfth ECM New Series album features first recordings of two major works: Chiaroscuro for violin and chamber orchestra, and Twilight for two violins and chamber orchestra. Gidon Kremer and Kremerata Baltica have had a long and close association with Giya Kancheli. On Twilight, the coming together of Kremer and Patricia Kopatchinskaja, two of the most powerfully expressive violinists of our era, makes for fascinating listening. The piece is a touching meditation on mortality, written at a time when Giya Kancheli was recovering from illness and seeing in the leaves and branches of poplar trees outside his window a metaphor for change and transformation. Chiaroscuro, meanwhile, borrows its title from the painting technique of the renaissance and baroque whose concern with dramatic contrasts of light and shade corresponds quite directly to the stark dynamics of the composer’s writing, vigorously conveyed by Kremerata Baltica. Recorded in Vilnius, Lithuania, in December 2014, and produced by Manfred Eicher, this album is an important addition to Kancheli’s ECM catalogue. It is issued in the composer’s 80th year.

Patricia Kopatchinskaja (featured)More information
Kremerata Baltica (orchestra)More information
10-05-2016 Opus Klassiek
""[...] Gidon Kremer is working a lot with and for the work of Kantsjeli for years now. Patricia Kopatchinskaja is a voilinfenomenom who appears to be born for this emotional journey [...]""
17-12-2015 Luister
"["].. In Twilight, written in 2004 for two violins and a chamber orchestra, Kremer is equally joined by Patricia Kopatchinskaja. The atmosphere of this work is no different from the Chiaroscuro one, but thanks to the solists, Kremerate Baltica and the finishing touch of the ECM-mastermind Manfred Eicher, it is yet again a vintage Kancheli." "