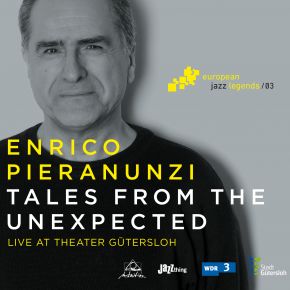 “Presence is very important to me,” Enrico Pieranunzi said in an interview for Jazz thing magazine’s series “European Jazz Legends”. “The theater director Peter Brook speaks of ‘emptying yourself’ in order to perform. You should be empty in order to listen to yourself and to others – and to be in the moment. That to me is the essence of jazz.” Born in the Italian capital of Rome on December 5, 1949, young Enrico developed his love of jazz from his father and by imitating what he heard on 78s by the likes of Charlie Parker, Lee Konitz, Lennie Tristano and Chet Baker. The latter, with whom Pieranunzi eventually got to play and record in Italy in the early 80s, steered his piano influences away from McCoy Tyner and Chick Corea toward Bill Evans. Combining this with a sense of swing and serious lyricism, Enrico Pieranunzi is internationally known by now as a unique and decidedly European voice on his instrument, having won accolades and awards for his more than seventy recordings.
On August 29, 2015, Enrico Pieranunzi added a new chapter to this extensive discography with this live recording from Theater Gütersloh featuring his trio with the Dutch double bass player Jasper Somsen and French drummer André Ceccarelli. Playing intricately woven compositions by the leader and telling a few spontaneous “Impro Tales,” they aptly illustrate Pieranunzi’s initial statement – and make these “Tales from the Unexpected” a profound joy to listen to, forever in the moment.

Jasper Somsen (featured)More information
André Ceccarelli (featured)More information
15-08-2016 Jazzflits
"Bass player Jasper Somsen and drummer Andre Ceccarelli are contributing greatly and are making the trio of Enrico Peiranunzi one of the most interesting truio's of the moment."
15-05-2016 Jazzenzo
"" [...] 'Tales from the Unexpected is a great result! [...] ""
01-03-2016 Piano News
""If another prrof hat been necessary - Pieranunzi delivered it with this high quality live recording: Like only few other pianists he integrates different impulses and at the same time avoids everything epigon.""
01-02-2016 JazzPodium
""With the imaginative, expressive and flowing compositions on this CD he tells his listeners 'Tales from the unexpected'.""
01-01-2016 Jazz'n'More
""master of improvisation and ravishing interplay""