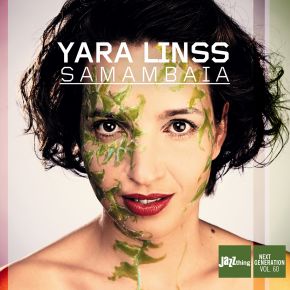 Vol. 60 of the series Jazz thing Next Generation
Long live clichés! Singers, who have specialized in the gourmet menu from Brazilian bossa nova, contemporary jazz and expressive onomatopoeia, are virtually defenseless against prejudices going the rounds these days. Summer, sun, Ipanema Beach, samba, Carnival, Antônio Carlos Jobim and Gilberto Gil: Europeans love this music not the least due to such idealized images and like to use it as acoustic post card in cold seasons. But it doesn’t have to be that way: winter, rain, the indoor pool in Fürth, folk music from the land of garlic, Franconian carnival, Gostenhofer Street, Peter Fulda, Andreas Blüml and Joachim Leonhardt. The circumstances in the everyday life of the singer of Yara Lambert sound more or less like that. Cliché, backward. If the German-Brazilian residing in Nuremberg were really a child of her milieu, then her debut CD "Samambaia" would have to sound different. However, perhaps precisely these twelve tracks from the pen of the vocalist with her crystal-clear soprano voice and guitarist João Luis Nogueira from Minas Gerais in Brazil effuse a strong personal touch, which is far from any role-playing games. They tell stories full of longing and poetry, full of irony and fate, from Brazil and Germany alike. Stories by and about Yara Linss. Her senses sharpened and open to all styles: this is how Yara Lambert presents herself as the 60th protagonist of "Jazz Thing Next Generation". As a result, she is symbolic for the global appeal of the young German jazz, which is nourished from the cultural roots of many countries and continents. The 35-year-old is a very versatile and fascinating artist, who returns to her roots with "Samambaia" without denying her current situation. In addition to her own lyrics, Yara Linss sets poems to music such as from the Brazilian poet Maria Lúcia dal Farra in the title track and "Céu" from the Polish Literature Nobel Prize winner Wislawa Szymborska.