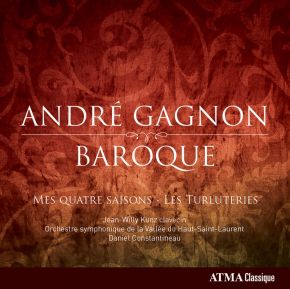 The album André Gagnon Baroque features the classic Mes quatre saisons and Les Turluteries by Canadian pianist and composer André Gagnon in a new rendition. This version is scored for harpsichord and orchestra and is performed by Jean-Willy Kunz with l’Orchestre symphonique de la Vallée du Haut-Saint-Laurent under the direction of Daniel Constantineau.
Written in Baroque style and inspired by the music of Johann Sebastian Bach and Antonio Vivaldi, the movements and dances of Saisons and Turluteries are based on popular 1960s songs by Jean-Pierre Ferland, Félix Leclerc, Claude Léveillée, and Gilles Vigneault, as well as tunes by Mary Travers, better known as “La Bolduc.”
For this recording both the orchestra and Kunz perform on period instruments – a nod to the era of the composers who inspired the stylings of these familiar 60s songs. André Gagnon composed and premiered Mes quatre saisons in 1969 on singer Serge Reggiani’s Montreal show. In 1972, the composer dashed off the two suites entitled Les turluteries, which were recorded on vinyl on the Columbia label. Both LPs were hits in their day.