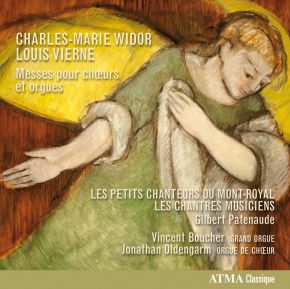 Vincent Boucher, titular organist of the great organs at Saint Joseph’s Oratory of Montreal, is the soloist on this recording featuring two organs and two choirs. He performs the masses and sacred motets of Charles-Marie Widor and Louis Vierne with the Petits chanteurs du Mont-Royal and the Chantres musiciens. This new ATMA Classique recording was made in the spectacular setting of the basilica of Saint Joseph’s Oratory.
Widor’s Messe, Op. 36, been described as “containing the power of Bach and of Handel, combined with the penetrating grace of Mendelssohn, all animated by a Catholic feeling.” The mass was composed in 1878 for the Saint-Sulpice church, and calls for a large number of singers formed into two choirs.
Louis Vierne began writing his Messe pour deux orgues et chœur, Op. 16, in 1899, when he was Widor’s substitute at Saint-Sulpice. The album also contains other sacred works by Widor: Tantum ergo and Ave Maria, both by Vierne, and Widor’s Psalm 83: (“Quam dilecta tabernacula tua”), his Tantum ergo, and his motet Sacerdos et Pontifex ("Surrexit a mortuis") for mixed choir and two organs.