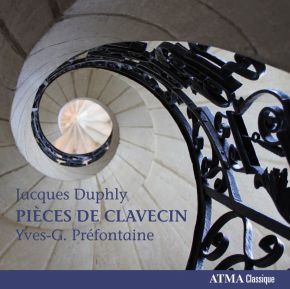 2015 marks the 300th anniversary of the birth of French composer Jacques Duphly. Duphly’s life bookended the reigns of Louis XV and Louis XVI: He was born in Rouen on January 12, 1715, the year the Sun King Louis XIV died, and he himself died in Paris, the day after the storming of the Bastille, on July 15, 1789. Duphly’s works comprise four volumes of harpsichord pieces recorded here by Canadian harpsichordist Yves-G. Préfontaine. This release includes a large selection of Duphly’s works on a double CD box-set.
Duphly followed in the footsteps of Rameau, but his works are more galant and Italian-influenced in style, as well as being more restrained harmonically. Like his predecessor, Duphly offers a wide variety of moods. “His pieces, generally, are gentle and likeable, like their composer,” wrote fellow organist and composer Daquin. They include his “heartfelt” Colombes (Doves), and Duphly’s vigorous and spirited version of “an allemande, which is entitled La Victoire, and is sure to please connaisseurs.”