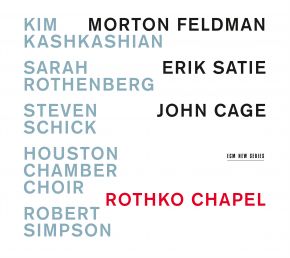 “Stillness, silence, contemplation. These are the characteristics of Rothko's paintings and of the chapel that was created for his work,” writes Sarah Rothenberg in the CD liner notes. “If Jackson Pollock's art is marked by rhythmic energy, by action made visible, the paintings of Mark Rothko hold the opposite – colors seem to float ‘as though they were breathed onto the canvas.’ … Tracing a trajectory of the avant-garde that spans a century, the music corresponds to the Chapel's environment of timeless reflection. The works of Americans John Cage and Morton Feldman, without text or program, interweave with the ruminative piano works of their spiritual predecessor from 19th century Paris, Erik Satie.”

This album addresses a network of musical relationships and inspirations. It opens with Morton Feldman’s Rothko Chapel, named for the Houston, Texas interfaith chapel built to house Mark Rothko’s site-specific paintings. Feldman considered that his music lay “between categories, between time and space, between painting and music”, and described the score as his “canvas”. Amongst his most important influences were abstract painters, his friend Rothko prominent amongst them (Rothko, for his part, yearned to “raise painting to the level of music and poetry”). Feldman was also liberated by the freewheeling example of John Cage’s work. “The main influence from Cage was a green light,” Feldman said. “It was permission, the freedom to do what I wanted.” Cage, that most relentless of 20th century experimentalists, didn’t acknowledge what he called an “ABC model of ‘influence’” but always had a special fondness for Satie, a musical inventor of good-humoured originality with whom he could identify. On a number of occasions Cage mounted a spirited defence for Satie, critical of the critics who assigned him a minor role in music history.

To simplify: Cage was inspired by Satie, and Feldman was inspired by Cage. Mark Rothko was inspired by modern music including Feldman and Cage. And when Feldman came to write Rothko Chapel, both Rothko’s paintings and their setting fired his imagination: “To a large degree my choice of instruments (in terms of forces used, balance and timbre) was affected by the space of the chapel as well as the paintings. Rothko’s imagery goes right to the edge of his canvas, and I wanted the same effect with the music – that it should permeate the whole room.”

Feldman’s piece was first played in the chapel in 1972. On the 40th anniversary of the opening of the Rothko Chapel in 2011, a concert was held there bringing together works of Feldman, Cage and Satie. This programme was reprised for the present CD with recordings made at other Houston locations – Rice University (Cage, Satie) and the Brown Foundation Performing Arts Theater (Feldman).

This version of Rothko Chapel is perhaps not the last word on how to play with absolutely reduced dynamics but we are seduced by the commitment and quality of interpreters. Violist Kim Kashkashian addresses the score with sincerity and frankness where others would be more ethereal (can be said of the percussionist Steven Schick and the Houston Chamber Choir).

"
01-02-2016 Klassieke Zaken
""The always incredible Kim Kashkashian is the driving force behind this fascinating project. Her Viola is embedded in celesta, percussion and choir.""
13-12-2015 Klassiek Centraal
"["] .. It is an extraordinary CD that also can charm the less contemplative man. The performances are beautiful and look like the chapel. The photo shows a somewhat barren impression but when you plunge into a different space, a space in which sound may take its time and where the listener can sink into and drift away in contemplation.""