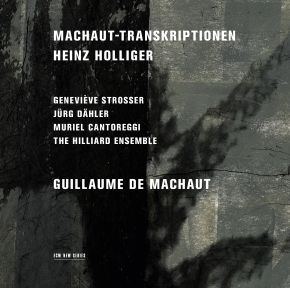 Swiss composer Heinz Holliger’s Machaut-Transkriptionen is comprised of a spacious cycle of pieces written over a ten year period. An imaginative re-investigation of the work of the great 14th century French composer-poet Guillaume de Machaut, it is scored for four voices and three violas. Note-for-note transcriptions of Machaut give way to Holliger’s increasingly creative refractions of the music. In Heinz Holliger's works, the succinct term 'transcriptions' conceals multi-layered variants of the enigmatic source material and the most subtle diversification of sound, using the technical possibilities of the 21st century. In the complete, almost one-hour cycle, Machaut's original compositions, performed a cappella, have been interwoven with Holliger's variations. Four of the transcriptions have been arranged for three violas alone. The traditional monophonic Lay VII, Amours doucement me tente, however, appears in a new four-part vocal setting. In the concluding Complainte from Remede de Fortune the singing voices join the violas.

As Holliger notes, his in-depth study of Machaut opened up new vistas for his compositional activity and his admiration for the source material is mirrored in the outstanding performances of the violists and singers. In Machaut Holliger recognises a fellow experimentalist. Paul Griffiths wrote in Modern Music And After: “As several composers found in earlier decades, the Middle Ages and Renaissance seem through a loop in time only a step away, a step taken among others by Heinz Holliger in his Machaut transcriptions.” In a brief liner note Holliger remarks that his first two Machaut transcriptions were composed in 2001for the West German Radio Viola-Viola Festival, “rather in contraposition to Luigi Nono’s newly rediscovered early Ockeghem transcriptions.” Plainly, there are points of correspondence to be explored between early music and modern composition, and the Machaut-Transkriptionen proves a perfect vehicle for the Hilliard Ensemble’s skills as interpreters of both the old and the new. This recording, made at Radio Studio DRS, Zürich, in 2010, captures the vocal group at the height of its powers. (The Hilliards’ own affinity for Machaut was earlier documented on an album of his Motets, recorded in 2001).

One of the most versatile and accomplished musical personalities of our time, Heinz Holliger was born in Langenthal, Switzerland, in 1939. He studied oboe with Emile Cassagnaud and Pierre Pierlot, piano with Sava Savoff and Yvonne Lefébure and composition with Sándor Veress and Pierre Boulez in Bern, Paris and Basel. After winning first prizes at international competitions in Geneva and Munich, he embarked on an unparalleled career as an oboist. As a conductor, he has collaborated with the most distinguished orchestras and ensembles for many years. The recipient of numerous awards and prizes (including Composers Award of the Schweizer Tonkünstlerverein, Art Prize of the Town of Basel, Ernst von Siemens Music Prize, Music Prize of the Town of Frankfurt, honorary doctorate of the University of Zurich, Zurich Festival Prize, Rheingau Music Prize and others), Holliger counts among the most strikingly original contemporary composers in the world today. At the Zurich opera house, his opera Schneewittchen, based on a text by Robert Walser, was received with international acclaim, and was subsequently the subject of an ECM recording. Other major recordings of Heinz Holliger’s compositions on ECM include the Scardanelli-Zyklus after poems of Hölderlin, Beiseit/Alb-Chehr, Lieder ohne Worte, the multiple prizewinning Violinkonzert, and Romancendres, a meditation upon artistic sensibilities in German musical and literary romanticism. Induuchlen set the poetry of Anna Maria Bacher and Albert Streich, and Aschenmusik – incorporating a revised version of Romancendres – considered the fate of Schumann’s lost Cello Romances.

ECM has issued several albums of Heinz Holliger as peerless oboist, playing both core classical repertoire and modern music, ranging from Bach and Zelenka to Elliott Carter and Isang Yun as well as his own pieces, including the fascinating Studie Über Mehrklänge.

The Hilliard Ensemble disbanded in December 2014 after more than 40 years as one of Europe’s leading vocal groups. The ensemble’s many ECM discs include the hugely popular Officium collaborations with Jan Garbarek, the new music compendium A Hilliard Songbook and recordings with Arvo Pärt, Giya Kancheli, Gavin Bryars, and Roger Marsh as well as music of Perotin, Gesualdo, Tallis, Machaut, Victoria, Palestrina, Walter Frye and more.

Muriel Cantoreggi has appeared as soloist on ECM discs with music of Barry Guy and Frank Martin, and as a member of the Munich Chamber Orchestra. She teaches at the Hochschule für Musik Freiburg.

Geneviève Strosser previously recorded Holliger’s Trema for the Aeon label, along with solo works of Ligeti, Donatoni, Scelsi and Lachenmann.

Jürg Dähler is a founder-member of the Collegium Novum Zürich and principal violist of the Orchestra Musikkollegium Winterthur and a member of the Winterthurer Streichquartett. He can be heard on Heinz Holliger’s Induuchlen with the Swiss Chamber Soloists.