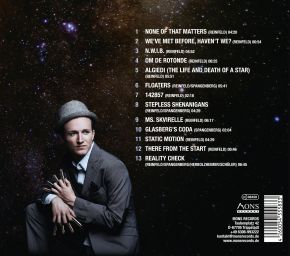 Harmonica and jazz? It would be hard to come up with more than a few names that have brilliantly combined these concepts together. The Belgian Toots Thielemans, a living legend on the chromatic harmonica would be leading the way, together with Stevie Wonder, with whom the instrument has gained access into the world of soul and pop.

Then all of a sudden, Konstantin Reinfeld appears; very young and a genuine talent on the diatonic harmonica, which he plays fully chromatically. He sets standards here which are otherwise only met by the US virtuoso Howard Levy. Technically adept with interpretative expressiveness and full of emotional maturity, Reinfeld presents such honest and rousing original compositions that you'd at first think the date of birth (late 1995) in the artist's biography was a misprint.

Even as a child, Konstantin Reinfeld was irresistibly attracted to music. He took piano and clarinet lessons, and experimented with different genres. Nothing unusual so far... But then at the age of fourteen, he randomly stumbled across the harmonica, and intuitively knew to keep that instrument in his hands.
That was in 2009.
As early as 2010, during his first live appearance at the Frankfurt Musikmesse, Konstantin Reinfeld caused quite a stir. In the same year, and at the invitation of Hamburg resident and blues harp icon Steve Baker, he took up a scholarship at the "Harmonica Masters Workshops" in Trossingen. Here he was picked out as a German "wunderkind" by the renowned instrument manufacturer Hohner, and became their youngest ever endorser.

His enthusiasm for the freedom of jazz grew equally alongside his autodidactic study of the instrument. Learning the increasingly demanding playing techniques which that kind of music requires was a unique incentive for Reinfeld, and brought him an increasing sense of self-fulfillment.
While still at high school, he recorded his debut album Konstantin Reinfeld & Mr. Quilento with the jazz pianist Christoph Spangenberg as musical director, and also toured national and international festivals as one of the most sought-after harmonica players.

With his band "Mr. Quilento" (Christoph Spangenberg - piano, Rhodes, synthesizer; Konrad Herbolzheimer - bass; Hajo Schüler - drums) Konstantin Reinfeld presents his latest album Algiedi. Once again he shows how his compositions (he penned 12 of the 13 pieces on this album himself) transcend the boundaries between musical genres. Energetic without denying contemporary influences, intense and yet played with a light hand (or rather with light and airy tones), he conquers new musical territories.

Talking about the album Algiedi and its genesis, Konstantin Reinfeld said:
"After the release of my debut album, the common musical understanding within the band has grown stronger because of our live performances at festivals and concerts. A consequence of this was an effort by everyone in the band to carry this energy which we had developed on the stage into the studio".
Influenced by innovative beat producers, effects pedals have found their way into Reinfeld's music for the first time. Algiedi moves naturally between the acoustic and electronic worlds, with the harmonica as the leading solo instrument. Although the CD is stylistically very diverse, the various influences within the band find their way to an intense connection. The result is that a unified work rich in improvisation has emerged, with clear arrangements and a subtle production.

And a final word: for Reinfeld, "Algiedi (The Life and Death of a Star)" is simultaneously the most personal song on the album, and the name of a binary star in the constellation of Capricorn. The parenthetical subtitle refers to stellar explosions, as can be seen in Darren Aronofsky's film "The Fountain". During a starburst, a golden mist envelops the star, from which new stars are born...
Musically located in the high-energy areas of tension between rock and spherical soundscapes.

Or put simply: close your eyes, open your ears - and enjoy!