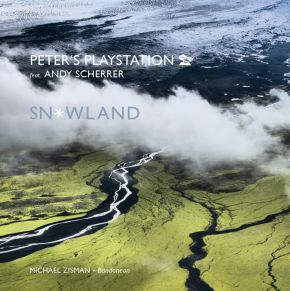 Did you ever ask yourself what is behind what meets the eye or the ear as a symphony orchestra is performing? There are, of course, the instruments, most of which have a rich developmental history of several hundred years. There are the members of the orchestra, all of whom will have been practising on their instruments for thousands of hours. And there is the music, usually compositions rooted in hundreds of years of mainly European musical tradition. And there are plenty of conventions that are normally followed to a large extent and for good reasons. So it takes a plethora of preconditions that are to be met before we can be enchanted by, say, one of Brahms’ symphonies.
How different from that kind of culture is a band like Peter’s Playstation? Some of the instruments have the same historical background as those in the symphony orchestra. But drums and percussion instruments are of mainly African and American ancestry whilst the bandoneon is commonly associated with Argentina – although it actually originated in Germany. The Fender Rhodes is an electric version of our good old piano developed in the USA. Peter’s Playstation is, in other words, a concoction of carefully selected instrumental options out of an almost endless variety of possibilities that exist in this globalized world (jazz, by the way, put globalization into practice long before the internet emerged). The players have certainly been practising as long as most classical performers even if part of the emphasis may have been laid on different things like finding their own personal sound and musical language. And  then there is the idiosyncrasy of the jazz idiom, shaped and used globally for many decades and providing a rich fund of stylistic options to choose from when determining a band’s musical identity. Not quite unlike classical music then, a project like Peter’s Playstation is rooted deeply in tradition and takes considerable effort to be brought to life.Another difference seems to lie in the way Peter works as a composer. On the one hand, he puts together – composes – his band. It must be an adventurous job to develop the synthesis of the instruments he has in mind and the individuals he would like to have in his band. Peter has always shown great talent and a good sense of anticipation in that: There may have been a few changes in the band’s personnel over the years, but the music has always maintained its transparent style and cool composure. Peter is, on the other hand, once again the composer of most of the tunes, although a record number of three compositions has been contributed by other members of the band this time. Gregor Müller and Eric Hunziker certainly knew how to write music that both reflects their own personal style and fits in with the overall character of this production. No less pleasing than that is Peter’s careful and inventive arranging job. The sound he gets by combining bandoneon, guitar and tenor saxophone in unison must be something new under the sun. And then he goes on to supplement these, for a few delightfully brief moments, with two further saxophones, thus creating a sound that is remotely reminiscent of a big band horn section and yet having a pleasingly unfamiliar effect on the listener. Beauty that does not shout at you.