The code is valid one time and valid for a 10 days after receiving the promotioncode. Your emailaddress will only be used by Challenge Records International and will not be given to 3rd party advertisers. If you have any questions please contact us.
TITEL CD is added to your cart.
1442326278 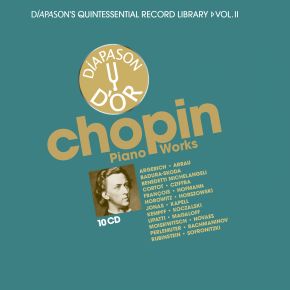 Bring together Mozart’s chamber music in a single box set? Schubert’s piano music? The Mahler symphonies? The principle is not new, but our particular method is unprecedented: the selection of thirteen hours of Chopin’s piano music was en- trusted to twenty-three experts. One team consisted of eight Diapason critics plus two of our highly esteemed colleagues, Jacques Drillon and Jed Distler. The other included a dozen pianists—and not just any pianists!—who agreed to enter into the spirit of the game. We sent seven or eight versions of the body of works they selected to Aldo Ciccolini, Nelson Freire, Nelson Goerner, Benjamin Grosvenor, Stephen Hough, Lang Lang, Nikolai Lugansky, Jean-Marc Luisada, Alain Planès, Alexandre Tharaud, Simon Trpecski and Daniil Trifonov. The fruits of their labours, their illuminations, and their ambivalences are summed up in the second half of this booklet. Certain groups of pieces implied a significant amount of work: hats off to Bertrand Boissard for leading us through the jungle of the Mazurkas, and the musicologist Jean-Jacques Eigeldinger, who worked through the twelve nocturnes. From Cortot to Rubinstein and Horowitz to Perlmuter, from the ageing Horszowski to the teenaged Pollini, this unparalleled survey celebrates Chopin’s creative imagination, as Nikolai Lugansky points out in the notes. We’ll be hearing more than thirty pianists, some of whose performances have long been fêted as definitive versions, others whose recordings are rarities, like Hofmann playing Ballade no. 4 in 1938. Novaes’s concert version of the Concerto No. 2 had only been issued in a limited edition, and at a very unlikely pitch, because the soundtrack went too quickly! We slowed things down to a plausible speed, an operation that was also carried out on several other 78s. For greater listening comfort we sometimes modified the order of the opus numbers in the polonaises and nocturnes, basing our decisions on the different sound qualities and key signatures. For the last two tracks on CD 10, critics and pianists are in perfect harmony. A few years ago the Diapason team held a round-table on the formidable Barcarolle, and actually came to the same conclusion as Alain Planès: of the eight versions he listened to blind, Dinu Lipatti and Martha Argerich emerged as clear favourites, proving that our game of compare and contrast was not a completely random and subjective exercise.