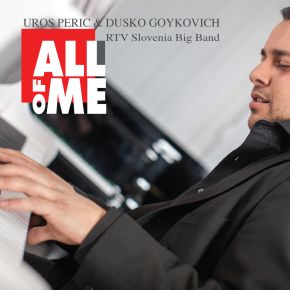 Uros had known about Dusko Goykovich years before he started his own musical career. He loves that bluesy, souly sounds of Dusko very much. They first met personally in 2006 when Dusko held a concert with the domestic band at the Royal Garden Jazz Club in Graz, Austria. The chemistry between these two men, although almost of 50 years difference, was perfect and they set up the programme for the All of Me CD.

For Uros it was a great challenge and excitement to work with the man who shared the stage with musicians like Miles Davis, Dizzy Gillespie, Woody Herman, Scott Hamilton and many, many other musical celebrities. Uros suggested  the songs to appear on the CD and Dusko added two tunes of his choice: Summertime, arranged by himself, and When I Saw You (music by D. Goykovich. lyrics by J. Evans).

Dusko has never before recorded Summertime with any singer. This album thus consists mainly of jazz standard, and one song comes from Uros' feather, Without You I've Got Nothing But Misery.