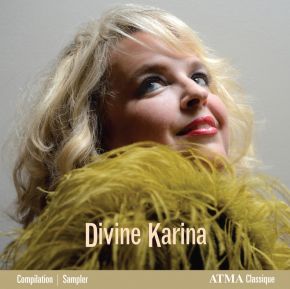 "Divine Karina" is how Montreal music critic Claude Gingras described Karina Gauvin. The Canadian soprano has won rapturous acclaim in North America and Europe over the last two decades. This new compilation recording features airs by Handel, Purcell, Vivaldi, and Mozart drawn from her ATMA Classique discography. Karina joins her sister Nathalie - a singer in her own right - for a bonus track called You, My Sister. Tyler Williams composed this samba-flavoured song, and the Gauvin sisters wrote the lyrics. Not to be missed!