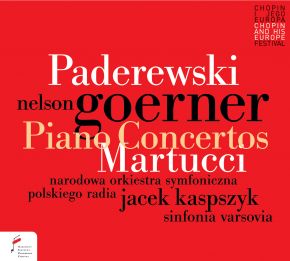 This new release features two piano concerti from the second half of the 19th century in the rendition of Nelson Goerner, an outstanding pianist who has appeared at many editions of the Chopin and His Europe Festival with recital and orchestral programs. The album presented is a recording of two selected musical festival events from 2009 and 2010: I. J. Paderewski’s Concerto with the Polish National Radio Symphony Orchestra and G. Martucci’s Concerto with Sinfonia Varsovia, led by Jacek Kaspszyk. The Polish National Radio Symphony Orchestra in Katowice fulfills the role of an ambassador of Polish culture on the international artistic scene. The ensemble has performed in Brussels, Vienna, Madrid, Rome, Kiev, Paris, and London. They have collaborated with some of the greatest composers of the twentieth century, including Witold Lutoslawski, Henryk Mikolaj Gorecki, and Krzysztof Penderecki.