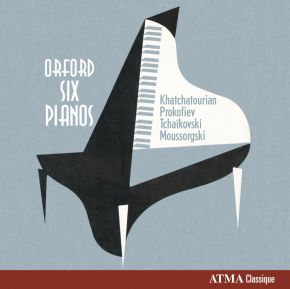 Orford Six Pianos: Volume 2 is the second recording by the ensemble, making the group’s 10th anniversary.; The ensemble’s name, Orford Six Pianos, pays homage to the 20th century French composers known as “Les Six.”; Olivier Godin, Francis Perron, and Louis Dominique Roy have transcribed the compositions on this album for piano sextet. The recording features works by Prokofiev, Tchaikovsky, and Khachaturian.; Ensemble member Mariane Patenaude says of the album, “Anything rhythmic works well with this lineup – Russian music and symphonic pieces are perfect for pianos.”