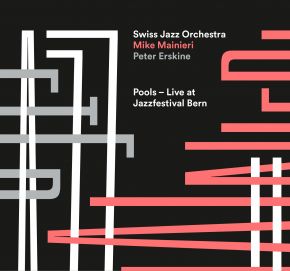 With the idea of forming a Swiss big band of international renown, the "Swiss Jazz Orchestra" (SJO) was founded in September 2003 by George Robert and Stefan Geiser in Bern. Following the example of New York's "Vanguard Orchestra", the SJO has performed weekly in Bern ever since. With their roots deeply anchored in jazz, the hallmark of this extremely lively orchestra, filled with leading Swiss professional jazz musicians, is the stylistic diversity of the repertoire.

The SJO have already produced the marvellous live album SJO feat. Paquito D'Rivera, Claudio Roditi & Michael Zisman - Live at Jazzfestival Bern (MONS MR 874 550) during a guest appearance at Marian's Jazz Room, the club at the Hotel Innere Enge. Now they show their stuff again with another top-quality work from the excellent live atmosphere of the Bern Jazz Festival. Together with two absolute heavyweights of the international jazz scene, Mike Mainieri (vibraphone) and Peter Erskine (drums), the big band has recorded Pools - Live at Jazzfestival Bern in that very same club. With this album, they provide more evidence of the virtuosity and magnificent diversity of their repertoire!

The result is a diverse set, with extended tracks that give the orchestra's outstanding soloists plenty of space.

Mike Mainieri and Peter Erskine are bound together by a lengthy musical history. Erskine was already sitting behind the drums in Mainieri's celebrated band "Steps Ahead" way back in 1981. One of this line-up's most famous pieces is "Pools", originally by the pianist Don Grolnick, and heard here in a superb arrangement by Philip Henzi. No question then what the album title would be…

The rest of the setlist also comes from the Mainieri/Erskine catalogue. 'Flying Colours' and 'Bullet Train' were debuted on Mike's solo album Wanderlust (1981), and found their way into the "Steps Ahead" songbook. 'Las Dos Loretta' and 'Vertigo' share a similar story. These songs are complemented by the classic 'Liberty City' by Jaco Pastorius, and Wayne Shorter's 'Elegant People', which, incidentally, was the first piece that Peter Erskine played drums on for "Weather Report".

All in all, a terrific big band sound, paired with the guests' musical virtuosity, and the outstanding, surprising arrangements!