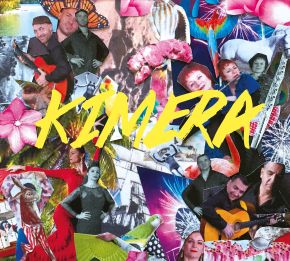 One flute (Regula Küffer), two guitars (Antonio Flores, Nick Perrin) and flamenco dancing (Rocío de Flores) – this is all to be found within KIMERA, who combine the best of both worlds on the frontier between flamenco and jazz.

What unites these four virtuosic, highly creative and artistic personalities, is a deep conviction sparked by the joy that they find at the alleged limits of musical discovery, and a love of improvisation.

Antonio Flores, a native of Córdoba, was born with flamenco in his blood. He began to play in the flamenco guitar school there even as a child. Today he is considered one of the leading lights in his profession, touring the world and receiving a number of prestigious awards. Since 2013, he has lived with his wife Rocío de Flores in Bern, where their path soon crossed with that of Nick Perrin.

Guitarist and composer Nick Perrin can look back on jazz guitar studies at the Bern University of Music and Theatre. Since 2006, he has dedicated himself to flamenco and its connections with jazz.

The "classical flautist" Regula Küffer discovered her passion for jazz both before and during her studies at the music academies of Bern and Geneva, and remains free from reservations when it comes to good and challenging music of any genre.

Rocío de Flores was born and raised in Bern, and with Spanish roots, she carries both of these worlds within herself. Since her childhood, she has committed herself to both flamenco and classical dance, and her artistic journey has seen her move repeatedly between Spain and Switzerland. Now this expressive and authentic dancer enriches and complements KIMERA as a permanent member.

KIMERA – this is the story of a musical alliance, an ever-growing and evolving artistic friendship.

Straight after Flores and Perrin's first meeting, the two guitarists and composers started exchanging their musical know-how. No surprises there!

From this process they developed their very own compositional language for contemporary flamenco.
Already familiar with Nick Perrin's musical flow as a duo partner, Regula Küffer complements this language perfectly. With her flute, she lends an exciting and remarkable timbre to flamenco, and really allows its rhythmic power to shine.

Thanks to Antonio Flores's numerous contacts, the group has often been able to bring outstanding artists to Switzerland to work on their project. Mariano Romero (vocals), Rafael Del Pino "Keko" (dance), José Prieto "El Caja" (vocals, percussion) as well as Christoph Steiner (drums) and the bassists Matthias Wenger, Antonio Schiavano, Buven Castilla and Lolo González can all be heard as guest musicians on this debut album.

KIMERA – an edgy and exciting musical frontier that unites the fire and depth of flamenco and jazz!