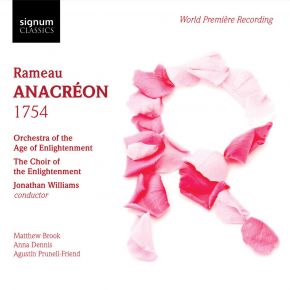 Jean-Philippe Rameau wrote two complete Anacréons, both of them a one-act acte de ballet, but with two different plots and librettos. Anacréon (1754) had a successful premiere followed by some performances in Paris after the composer’s death, and then fell into oblivion for almost 250 years. From fragmented manuscripts scattered through Paris’s libraries the work was subsequently reconstructed by Dr. Jonathan Williams and published. Dr. Williams leads this world premiere recording, joined by a leading cast of soloists and the Orchestra and Choir of the Age of Enlightenment.

Orchestra of the Age of the Enlightenment (artist)More information