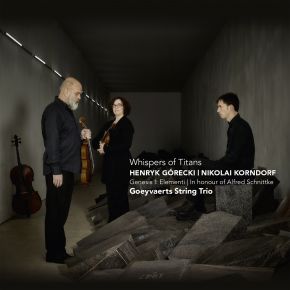 Medieval, Romantic, Minimalist, Avant-garde – all find a place in the music of Nikolai Korndorf. Yet his work rarely sounds eclectic, the ideas and techniques combining to form a focussed, and often uncompromising, musical language. Korndorf’s compositional career falls into two periods. His early work follows the Modernist trends of the time. But from the early 1980s, Korndorf adopted a new approach, more diverse, if no less austere. Tonality became an important element of his music, although more as a point of reference than an integral part of his harmonic language. The String Trio was completed in 1986, so dates from the early years of this second style. It was written in homage to Alfred Schnittke, a mentor figure for Korndorf and many other composers of his generation. “He was a teacher. His ideas, his oeuvre, his moral position, his attitude towards art were teachers as well….Influence, the effect of Schnittke on younger composers was much wider than the influence of style, it was an influence of world outlook.” The result is a work that draws on many aspects of Schnittke’s compositional technique, while only occasionally sounding like him. Korndorf’s own compositional outlook is just as significant to the work, especially his interest in Medieval Russian hymnody and American Minimalism. 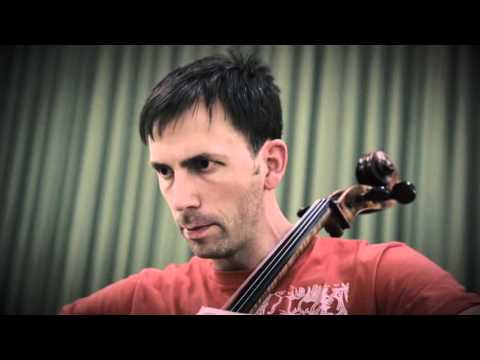 Goeyvaerts Trio (artist)More information
Henryk Górecki (composer)More information
01-11-2016 Music Emotion
""The second work, 'Chorale-Toccata-Aria', from the Russian Nikolai Korndorf is way more accessible, persumably for a lover off the harmony as me, but where the textbook - wonderful! - has an enormous input.""
16-06-2016 Gramophone
""What, then, to make of 'Genesis I: elementi per tre archi,' Op 19 No 1, the opener on the Goeyvaerts String Trio’s new disc of 20th-century Polish works? Dating from 1962, this scrabbling and violent one-movement work is early Górecki, but it’s also typical Górecki – more so, at any rate, than that Third Symphony. He wrote it just after his return from Paris, where he had made contact with Boulez and other enfants terribles of musical modernism, and in it attempted to lay out a new type of composition. What emerged was music moulded not from notes but from noise and an artillery of extended playing techniques: no picnic, then, for either players or listeners, but original for its time. In this brave and uncompromising performance, the Goeyvaerts certainly make it snarl.
Then, by way of a peace offering, they play In Honour of Alfred Schnittke written, in 1986, by the little-known composer Nikolai Korndorf. For lovers of the Tavener-Pärt aesthetic, it’s like stepping into a warm bath."
"
15-06-2016 Irish Times
"Short playing time — 47 minutes — but intense music-making."
14-06-2016 NRC Handelsblad
""[...] The excellent Goeyvaerts Trio takes a brave choice with this intens performed repertoire. [...]""
08-06-2016 Polish Music
""[...] So bravo to Kristien Roels, Kris Matthynssens and Pieter Stas for bringing to new ears this vital but rarely performed work from a 28-year-old Górecki. [...]""
07-06-2016 Stringtrio
""[...] An interesting quality of this new recording is the way that the fast central movement feels like it is unfolding at the same slow pace as the outer ones. [...]""
01-06-2016 klassiekezaken
""it knows to translate Gorecki's partiture extremely responsive.""
06-05-2016 Luister
"" [...] Also the mucisians have no trouble crossing the line of euphony [...] ""
27-04-2016 de standaard
""[...] On the armoured harmony's, the players have put a fascinading stain. that makes the music move to noise. [...]""