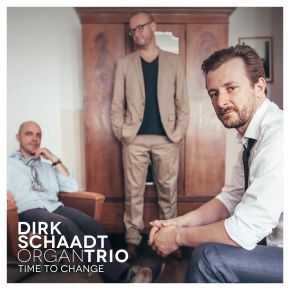 The Cologne music scene has always been fertile ground for sensational projects. International stars from many genres have made the city their home, and met local heroes as well as emerging talents. Culture, clubs and concerts are the pulse of this city. Musicians see each other on stage and in sessions, and sometimes when they get together it sparks from the very first meeting. That's exactly what happened with the Dirk Schaadt Organ Trio, who are now presenting their debut album Time To Change.

Already recognised masters of their craft, the three musicians, Dirk Schaadt (Hammond organ), Martin Feske (guitar) and Marcus Möller (drums), immediately sensed that they were also on the same wavelength musically.
"The high-energy, homogenous trio sound was there from our very first note together. It was immediately and compellingly clear to us all that this must be the start of a sensational new band!" quipped Schaadt with a wink.

Having chosen Cologne as his adopted home, Dirk Schaadt has played across Europe for years with international artists such as Mirja Boes, Tom Gaebel, Marla Glen, Sydney Youngblood, Sister Sledge and various talent show winners on stage, in the studio or in front of the TV camera. His instrumental version of the AC/DC classic "Highway to Hell", produced together with a Cologne soul-DJ, received airplay worldwide, including in the USA, Australia, Japan and the United Kingdom.

The guitarist Martin Feske, trained in Cologne and Texas, has worked with numerous renowned musicians throughout his career. These include such diverse talents as Till Brönner, Jeff Lorber, Kirk Whalum, Lew Soloff, Gary Grainger, Peter Fessler, Tom Gaebel, Jose Carreras, Andrea Bocelli, Peter Kraus. His concerts and tours have taken him to the Berlin and Leverkusen jazz festivals, among others, and across Europe. He has also worked as a lecturer in jazz/pop guitar at the Münster University of Music.

A native of northern Germany, drummer Marcus Möller enjoys a reputation as one of the most versatile drummers there is. Over the years, his truly incredible stylistic versatility has seen him work with such renowned artists as Marc Marshall, Marla Glen, Lars Danielsson, Roy Hargrove, Nils Landgren, Inga Lühning and Giovanni Costello (The Voice of Germany).

With the ten original songs on Time To Change, the high-energy trio presents an immense variety of styles, from funky soul-jazz, to finely worked ballads, to groovy and swinging jazz compositions. These songs combine to create a dynamic, coherent and therefore unique and unmistakable trio sound. All of the trio's recordings are played live without overdubs. "By using this set-up, we were best able to capture the musical energy and the dynamic, homogenous trio sound" said Schaadt.

Titles like "Eddie Likes It" have a bass line and drum groove reminiscent of the saxophonist Eddie Harris, and on "Seven Dance", the threesome manages to get an audience of 1000 people to move their feet, even in tricky 7/4 time. "She's Late" is playfully dedicated to an organ student who constantly turns up late. And yet it's actually this tardiness, this "scatterbrained dawdling", which becomes the song's focus, expressed through its "teetering" 5/4 groove and its clever melody. The ballad "Time to Change" sensitively and forcefully deals with life's more borderline situations. It's skilfully done too, with light melodic lines and modern harmonies, and it also points out the more positive aspects that are inherent to such moments. "You Think You Know It" seems vaguely familiar… Or is it? Stylistically, it's a tribute to Benny Golson. And then there's "Just an Option". Originally planned for a much larger line-up, the trio version has evolved into a wonderful "chamber music" soul-jazz pearl.

On some of the pieces, the Dirk Schaadt Organ Trio invited musicians known to them from the Cologne jazz scene to play along: Ludwig Nuss from the WDR Big Band (trombone), Denis Gäbel (tenor saxophone) and Matthias Bergmann (trumpet, flugelhorn). They were only too happy to accept the invitation and have enriched the music with their fresh sounds.

How good it is that they met...

The Dirk Schaadt Organ Trio – with their distinctive debut "Time To Change", they've been a real boon for the music scene!