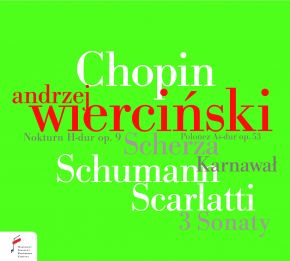 The new disc in the Young Talents, Debuts series, where The Fryderyk Chopin Institute presents recordings by outstanding Polish musicians of the younger generation. The debut album of Andrzej Wierciński – the winner of, among other competitions, the Fryderyk Chopin National Piano Competition in 2015 – contains works by Fryderyk Chopin, three sonatas by Domenico Scarlatti and Robert Schumann’s Carnaval op. 9.
It was recorded at the Witold Lutosławski Concert Studio of Polish Radio, Warsaw, 3–5 May and 8–10 June 2015.