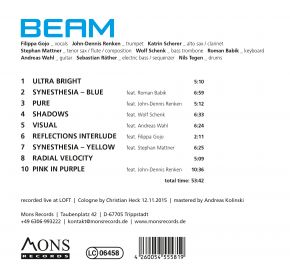 BEAM!- the name of this nine-piece band is a statement in itself, because they really do light things up. And that’s exactly what renowned composer and saxophonist Stephan Mattner’s concept is all about. Based in Cologne, he has gathered eight of the Rhine-Ruhr jazz scene’s most prominent musicians around himself. Together, they create their own new music, borrowing from jazz, pop, heavy, minimal, modern and film music, which they present here for the first time on Pure. Founded by Stephan Mattner in July 2014, the BEAM! Ensemble follows a color-synasthetic approach. Synesthesia basically means a connection between two or more physically separate areas of perception. In this case, music and color. Mattner is referring here to none other than Aristotle, who had already put forward the claim that harmony between colors is similar to that between sounds. Over the following centuries, scholars have taken up this thesis again and again in order to support it with their o