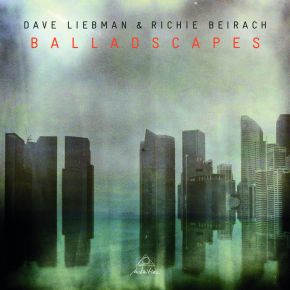 As a setting, the duo fosters one of the purest forms of musical dialogue. It also allows the kind of freedom that can lead to endless rubato and loquacious solos that get lost within themselves. The music that Dave and Richie have created is always grounded in strong content and intelligence, regardless of context and genre. As is heard in bold relief here on “Balladscapes”, Beirach is the secret weapon here. According to Dave, “In any band we’ve ever been in together, Richie’s the anchor, more than the bass and drums. His time is perfect.” That firm sense of time along the unique sonority created by Dave’s soprano sax and Richie’s touch give this project its shape and sound. On a few pieces, Dave switches to tenor sax giving their sound more heft, but the stately passion that informs their music is maintained throughout. Over the years, these two have used ballads in their performances and recordings, but this is the first all-ballad album they’ve done. And it’s quite unusual in its approach. The program offers some originals (new and old), but includes far-ranging material from Bach, Weill, Jobim, Strayhorn, Shorter and Coltrane. Beirach and Liebman take fewer liberties with the material that one might expect and the music is better off for that restraint. This is a gorgeous, mesmerizing chamber music recital. And like all great music, it bears fruit with every repeated listening.

Dave Liebman (artist)More information
Richie Beirach (featured)More information
03-10-2016 Jazzflits
"Liebman and Beirach are showing a rare beautiful feeling of harmony."
31-07-2016 Jazzenzo
"''A strong contentwise and intelligent album made by two masters that know each other through amd through.''"
01-07-2016 Doctor Jazz Magazine
"The CD do isaccessible and tonally, Liebman plays mostof the time neatly inside the harmonys that Beirach lays down."
01-05-2016 Fono Forum
"4* music/ 4* sound

"Their musical communication takes a witty couse, is full of surprising turns and leads to improvisatory climaxes.""

01-04-2016 Jazzpodium
""Liebman plays (...) slim and reduced lines which slowly lead away from the themes with increasing duration of the pieces and become multicolord motiv sculptures. Beirach adds thrifty, open voicings, lets cristallinely articulated arpeggios flow, and plays solos with spartan elegance.""
01-04-2016 Jazzthing
""It is the perfect combination of the wind player's vertical lines and the pianist's horizontal drillings in the depths of space.""