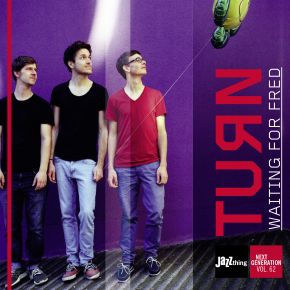 What attracts young musicians to a piano trio? Established structures, overpowering models, prejudices as heavy as lead and unsaleable flotsam: there must be really good reasons when set three ambitious instrumentalists join forces in a practice room, on stage and perhaps even in a recording studio. A particular vision? The hope to generate something completely different, possibly even previously unheard, to rock the boat in the best case and not to be overlooked as millions of other grains of sand on an expansive beach?
All of this applies to pianist Jonathan Hofmeister, double bass player Florian Herzog and drummer Jan F. Brill. They bypass the traditional way as far as possible to name themselves after their piano player and feature him more or less as a "star". After all, the trio has three equal components. This is already the first difference. Hofmeister, Herzog and Brill prefer to operate under the short, punchy term "Turn". This already points to the collective objective: to embark in a different direction with no holding back, but instead to go their way consistently. Virtuosity meets energy, and new ideas an unbridled desire to make music. Each of them understands the seemingly all-powerful myth "Piano Trio" not as a burden, but as a challenge. In principle, they would actually have to fail like so many before and even after them. Instead, "Turn" faces the task boldly, bravely and at ease, but with a healthy sense of proportion for what is feasible.