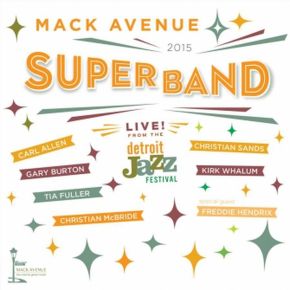 Live From The Detroit Jazz Festival

Since its rollicking debut at the 2012 Detroit Jazz Festival, the Mack Avenue SuperBand has become a tradition at the annual event, a gathering of label superstars that the Motor City can look forward to every Labor Day weekend. Live From The Detroit Jazz Festival – 2015 captures the fourth incarnation of the all-star ensemble, for the first time under the leadership of Christian McBride. This year, McBride takes over as musical director (a role previously held by fellow bassist Rodney Whitaker), leading a knockout conglomeration of Mack Avenue artists through a set as sweltering as that late-summer day in the concrete outdoor arena of Hart Plaza.