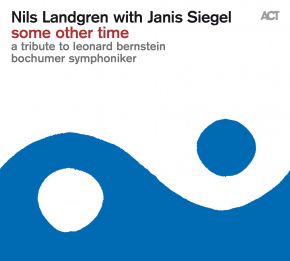 The all-star trio provides the rhythmic foundation:
Wolfgang Haffner, the infallible timekeeper and “Germany’s coolest drummer” (ARD ttt); Dieter Ilg, who brings with him the perfect references for this project in the form of his classic interpretations of Verdi, Wagner and Beethoven; and last but not least Swedish pianist Jan Lundgren, who along with his Nordic “Vemod” and impressionist esprit also has roots in the American jazz piano tradition.

None other then American star arranger Vince Mendoza (six Grammys and 25 nominations!) was asked to do the orchestration and direct the Bochum Symphony Orchestra team. Mendoza, who over the years has worked with greats including the likes of Herbie Hancock and Al Jarreau, the London Symphony Orchestra and the Berliner Philharmoniker, and with pop stars from Björk to Robbie Williams, had already been a key part of a ground-breaking ACT production in 1992: “Jazzpaña”, which merges Flamenco with jazz. His big surprise for the Bernstein project: no strings (as one would most certainly have expected), only woodwinds and brass, arranged masterfully and with a richness of sound nuances.

The rhythm section fuses completely with the Bochum Symphony musicians and it is over this foundation that the inimitable trombone and characteristic, fragile vocals from Nils Landgren soar.

The third key person for the project, alongside Landgren and Mendoza, is Janis Siegel, who achieved international stardom with the a-cappella quartet “The Manhattan Transfer”. She was the logical choice for Nils Landgren: “Janis is the perfect singer for the project. She injects Broadway flair into the music and is very closely linked to Bernstein’s music. Janis is a good friend of Jamie Bernstein, Leonard’s daughter. I visited her in New York, we talked about the music and rehearsed a little, and it worked from the very first moment on. Janis’ contribution to “Some Other Time” is of immeasurable value.”