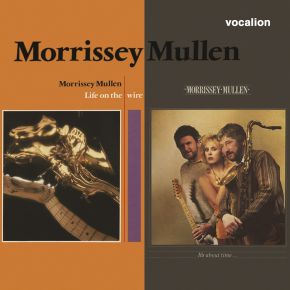 Life on the Wire & It's About Time

Life on the Wire

Morrissey Mullen was one of the UK’s premier jazz-funk outfits of the late 1970s and ’80s, enjoying both critical and commercial success at a time when bands such as Shakatak, Freez, Light of the World and Level 42 were also emerging from Britain’s nascent jazz-funk scene. Saxophonist Dick Morrissey and guitarist Jim Mullen met in the mid-1970s thanks to their mutual friendship with various members of the Average White Band. In 1976 they were invited to New York by the AWB ostensibly to work on some music, but instead it resulted in the first Morrissey Mullen album, Up (Atlantic Records, 1977), with backing by the AWB. Returning to Britain Morrissey Mullen recorded one album for EMI’s Harvest label (Cape Wrath, 1979) before signing to independent label Beggars Banquet and recording a series of albums throughout the 1980s that are arguably their best. Their second and third albums for Beggars Banquet, Life on the Wire (1982) and It’s About Time … (1983), are compiled here and both offer shining examples of the band’s lyrical yet driving brand of jazz-funk. Carol Kenyon appears on the Life on the Wire album and her smooth-as-silk voice is featured on the up-tempo groove of the title track and Come and Get Me as well as the beautiful ballad, Ships that Pass in the Night. 1983’s It’s About Time … was produced by Richard Niles and features his then-wife, Tessa Niles, on vocals, and once again Dick Morrissey and Jim Mullen’s brilliant musicianship is at the heart of it all. Among the titles are keyboardist Jess Bailey’s Stop and Look Around, Jim Mullen’s Ounce of Bounce, Ol’ Sax and Captain Axe and So So Fine plus a jazz-funk remake of Vangelis’ Bladerunner love theme (which was included on the album because Dick Morrissey had played on the film soundtrack).