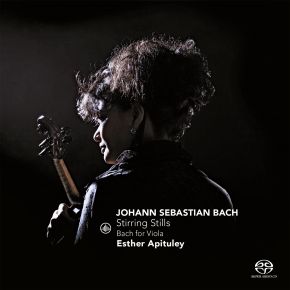 Dear Mr. Bach,
I play the viola and I’m addicted to the sound of the viola and to classical music. Addicted to classical music because there are no limits, your imagination is as free as a bird.
For a long time, it’s been my heart’s desire to record on the viola the notoriously monumental closing movement of the Second Partita you wrote for solo violin – the Chaconne. After bowing my way through thousands of miles of notes, I finally worked up the courage to record the piece.
It seems you wrote the Chaconne after returning home from a long and exhausting journey on foot to discover that your beloved wife had passed away in your absence. A composition of fifteen minutes in length for a single instrument, offering great solace but making huge demands on the performer. A composition full of power and mystery.
I actually really like the fact that there are so few indications on the music, as this lets your music generate its own impulsive response at the point when you start to play it.
I embarked on my confrontation with your mystery over there, in that little chapel looking out over the Pyrenees, and I tried to record what I felt at that exact point in terms of timing, vibrato and bowing. Your notes were the only markers I had to keep myself on course. Your music has its own heartbeat, and it can speed up or slow down all of a sudden. You take some time between the notes, or perhaps sometimes you don’t. This freedom is a complex thing. If everything is good, then nothing is wrong. This is exactly why it’s such a delicate piece to record.
But I went on and did it – I recorded your notes – all on my own in that little chapel. And without even a recording technician. This meant I could record whenever I wanted to, even in the middle of the night. To me, this was the only way to reach the essence of how I wanted to record your music. With complete freedom.
Esther Apituley

(New) Talent gets a chance via CROWDFUNDING

At Challenge Records International we are always looking for great new talent and the opportunity to explore and create new music. We have two artists who really want to start recording a brand new album, one of them a brand new edition to Challenge, and we support this action!  Cappella Pratensis started their campaign at the beginning of January and are already turning to 4000,- euro's! Thanks to all the supporters for ...