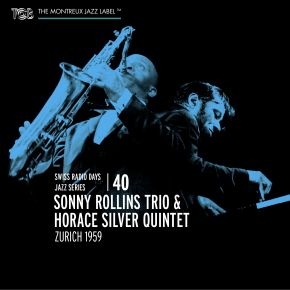 This Swiss Radio Days album features two pre-eminent modern jazz exponents - tenor saxophonist Sonny Rollins with his Trio - and pianist Horace Silver with his Quintet. These tracks embody the quintessence of small group modern jazz. Theodore Walter 'Sonny' Rollins was born in New York City on September 7th, 1930 and came into prominence when he won the Down Beat Critics' Poll as New Star in 1957. He was pioneer of the hard bop school of jazz. He also composed some memorable jazz themes, including 'Alfie's Theme, 'Sonnymoon for Two' and 'The Cutting Edge'. Horace Ward Martin Tavares Silver was born in Norwalk, Connecticut on September 2nd 1928. He studied saxophone in high school and played local gigs. stan Getz heard him on piano in 1950 and hired him to tour with the Getz quintet. In 1951, Silver moved to New York City and, over the years, he worked and recorded with Art Blakey, Miles Davis and many other famous musicians.

where can I buy this record? thanks for your answer