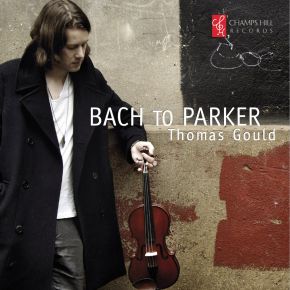 Violinist Thomas Gould (b. 1983), leader of the Aurora Orchestra and associate leader of the Britten Sinfonia, has established himself as one of Britain’s leading solo violinists. He is as equally at ease playing Bach and Beethoven as he is playing jazz or performing works by the rising young composers featured herein. Mr. Gould joined the swing band Man Overboard in 2011 (their first album All Hands on Deck was a 2013 Champs Hill release). Leading off the album is Bach's Chaconne in D minor, a pinnacle of the violinist’s repertoire; jazz legend Charlie Parker’s ‘Donna Lee’ concludes matters.