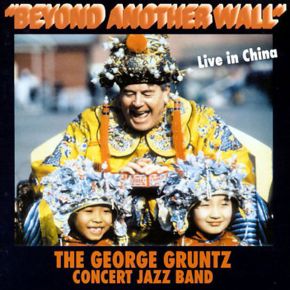 Beyond Another Wall, Live in China

In Nov. 1992 the George Gruntz Concert Jazz Band became one of the very first jazz groups to ever tour China. Gruntz's 16-piece orchestra at the time featured such colorful soloists as trumpeters Lew Soloff, Jack Walrath, Tim Hagans and John D'Earth, trombonist Ray Anderson, altoist Chris Hunterand the tenors of Larry Schneider and Bob Malach. For the tour Gruntz brought along bluesmen Billy Branch (on harmonica) and guitarist Carl Weathersby and they are heard singing and playing on three of the six full-length selections, making this set a little more accessible than usual. Ray Anderson's riotous "Literary Lizard" (during which he challenges Lew Soloff in the upper register), Weatherby's emotional guitar solo on "Carl" and the general spirit of this flexible orchestra makes one wonder what the Chinese thought of this extroverted and often eccentric music.N.A.