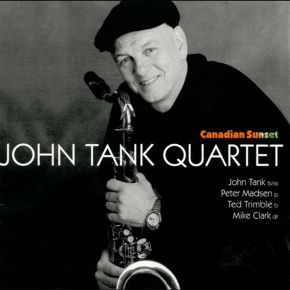 From the opening track of John Tank's second TCB release, the magic is obvious. This post-bop saxophonist grabs the listener's attention immediately with a twisting and melodic interpretation of Eddie Heywood's "Canadian Sunset," a piece that has almost disappeared from jazz. Tank's arrangement almost brings to mind an upbeat version of Grofe's "On the Trail," while pianist Peter Madsen's fascinating accompaniment is also a plus. Burt Bacharach's "A House Is Not a Home" can sound dreadfully dull in the wrong jazz musician's hands, but Tank's blistering version is solid on all counts. The leader also composed several numbers, including his lush ballad "Have You Heard This Song Before." Tank switches to soprano for Madsen's exotic "Surrounded by Night," as well as bassist Ted Trimble's hypnotic "Angela." Recommended.

Licens given back to Artist