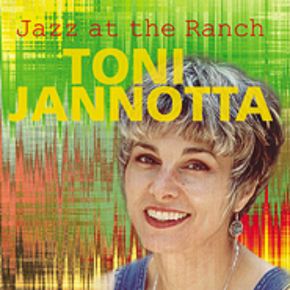 Jazz at the Ranch

With the Santa Monica Mountains as a backdrop and ghost of the legends guarding this sacred place for Native Americans, singer Toni Jannotta and her quartet got together for more than an hour's worth of vocal jazz. Jannotta applies her expressive and highly personal approach to a play list of ten tunes that cover a wide swath of musical jazz fashions, from songs by Chick Corea, Annie Ross, and Van Morrison to classic standards, as well as an original by the singer. This play list follows a similar path as her first album for the TCB label, Just Jazz, as she is determined not to be typecast by just focusing on one aspect of vocal jazz. There are several tracks that merit mention. Corea's "Time's Lie" is not an easy song to sing, but Jannotta takes on its intricate phrasing needs with ease. A medium-tempo "The Very Thought of You," competes with "Midnight Sun" as one of the prime cuts on the album. Jannotta's passionate and earnest interpretations get plenty of sympathetic support from her quartet, with particular nods to Chuck Manning's tenor and Ken Rosser's resonant guitar. Rosser swings mightily and Manning's soulful on the album's coda, Morrison's "Moondance." This album goes a long way to enhancing Jannotta's status as an up-and-coming jazz singer of note. Recommended.