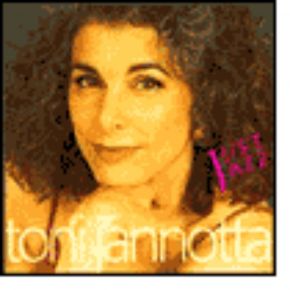 Citing Annie Ross as her idol and Jon Hendricks, Al Jarreau, and Bobby McFerrin as major influences, Toni Jannotta devotes a good part of her first album to the vocalese style as well as showcasing her lyric writing skills. Vocalese preferences like Horace Silver's "Doodlin'" and Hampton Hawe's "Jackie," with Annie Ross' lyrics, all are offered with the stream-of-consciousness vocalizing that characterizes vocalese. There's a rare vocal version of Thelonious Monk's "Well You Needn't," subtitled "It's All Over Now," with Mike Ferro's lyrics. Jannotta's light, melodic voice is well-suited to this style, except when she tries to reach higher notes, she tends to screech a bit. Her preference for vocalese notwithstanding, Ms. Jannotta realizes a steady diet of that genre wears quickly. To provide some diversity of style, she shows her ballad skills on "You've Changed" and on a haunting "Our Lonely Hearts" backed by Ernie Watts' soulful tenor saxophone. There's some backbeat stuff such as "The Man Who Has to Roam" and on Chick Corea's "500 Miles High" with David Crozier's flute playing a prominent role. Jannotta bops on "A Night in Tunisia" and on "Round Midnight." Her writing skills are put on exhibit with "Wish I Could Say," "Our Lonely Hearts," and "The Man Who Has to Roam." For this session, Jannotta has recruited players from musical genres other than straight jazz. Pianist David Scottand bassist Mike Elizondo come from fusion and rock. Gene Burkert has been on several albums with Poncho Sanchez. Drummer Kendall Kay has graced several rock albums. Robert Kyle on sax and flute has a blues background. All of this adds a variety of musical diversity within a jazz framework to this session. The first album of this young artist hopefully will lead to more and better sessions in the future. One complaint: The purchaser of this album is shortchanged by the less than 40 minutes of music on this album.