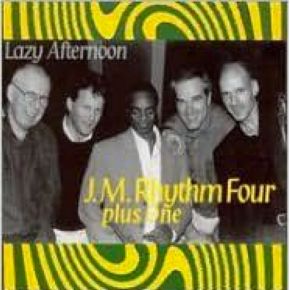 In New York, many jazzmen like to think of Manhattan as the center of the jazz universe. But truth be told, there are plenty of talented European improvisers who get along nicely without the Big Apple. They live and work in places like Stockholm, Milan, Paris, Berlin, Vienna, and Oslo, and they record for independent labels in cities that range from Brussels to Copenhagen to Munich. They love to play with visiting American musicians when they get the chance, but they don't stay awake all night and cry their eyes out if that doesn't happen. Zurich, Switzerland, is the home of the J.M. Rhythm Four, a hard bop quartet who celebrated their tenth anniversary in 1999. It was also in 1999 that the group recorded their third album, Lazy Afternoon, for the Swiss TCB label. This CD finds the J.M. Rhythm Four's 1999 lineup -- saxman/clarinetist Jorg Morgenthaler, pianist Andy Harder, bassist Roman Dylag, and drummer Robert Mark -- joined by an American musician, trumpeter James Zollar, who is from Kansas City. Thus, the group is billed as the J.M. Rhythm Four Plus One on this release. Nothing revolutionary or groundbreaking occurs, but the hard boppers are swinging and likable on original material as well as overdone standards that include Duke Ellington's "Sophisticated Lady" and Bud Powell's "Parisian Thoroughfare." Clifford Brown's pieces get a fair amount of attention from the jazzmen, who embrace "Sweet Clifford" and "Tiny Capers" in addition to the well-known "Daahoud." Their interpretation of "Daahoud" is perhaps the album's most surprising track because the Brown standard is performed at an unusually slow tempo. Again,Lazy Afternoon doesn't reinvent the jazz wheel. But it's a decent, if conventional, example of European improvisers interacting with an American guest.