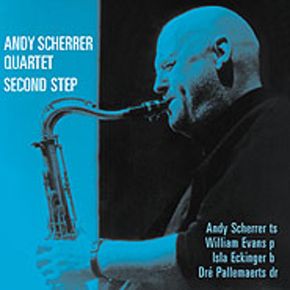 Europe is full of talented jazz improvisers who aren't well known in the U.S.; one such player is Andy Scherrer, a Swiss tenor saxophonist who is known for his work with the Vienna Art Orchestra (which he joined in 1991). Scherrer is well respected in Swiss jazz circles, but surprisingly, he waited a long time to provide an album of his own -- the jazzman was in his early fifties when he recorded Second Step, his first session as a leader. Not as adventurous or daring as his work with the Vienna Art Orchestra, this 1999 date is a competent post-bop/hard bop effort that draws on such influences as Wayne Shorter, Joe Henderson, and John Coltrane. Nothing unusual or surprising occurs; pieces by Scherrer and bassist Isla Eckinger sound like they could have been recorded for Blue Note in the '60s. But everything on Second Step is well executed, and Scherrer's solos are expressive and enjoyable, if derivative. Leading a cohesive quartet, Scherrer is joined by Eckinger, pianist William Evans (the only American on the album), and Belgian drummer Dré Pallemaerts -- all of whom are appropriate sidemen for the big-toned saxophonist.