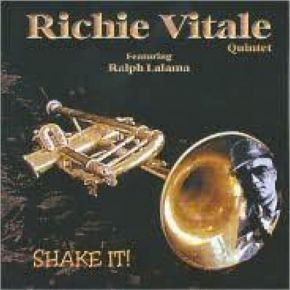 Shake It! is horn man Richie Vitale's third album for the Swiss-based TCB label. Modernist sax player Ralph Lalama guests with a quintet that has international flavor sharing playing time with Vitale throughout. But Lalama's high powered, biting sax seems out of place on a CD that, for the most part, is devoted to the hushed side of jazz. In contrast, Vitale's horns never loses their cool, even on those semi-progressive cuts like "Hara." This nine-minute track features avant-garde-ish Lalama's chattering balanced by the pleasant discursive piano of Tardo Hammer. You can clearly hear that the lineage comes straight from the small bop groups of the 1950s and 1960s (those headed by Hank Mobley, Freddie Hubbard, and others). One gets the feeling that this tune was inserted to allow everyone to show their impressive technical prowess -- and that they do with ease and aplomb. But the tunes that attend to the melody and are lyrical will catch and hold the ear of most listeners, like dreamy rendering of "Blame It on My Youth." Vitale stays well within the middle register and on or near the beat. No screeching here. That debts are owed to the Art Farmer, Miles Davis and Chet Baker school of brass playing is evident. With his muted horn in hand, Vitale approaches Miles Davis' aloofness on Jeff Morrison's "Silhouette." Lalama shows he has a gentle side on this cut. Vitale's interest in music from the Broadway stage explains the presence of "Small World," which comes close to being a classical brass quintet performance, and "I Believe in You" from Gypsy. Vitale played in the pit band for that show. He also gained important experience in becoming a solid lyrical player as a member of the band backing Frank Sinatra, sitting in the trumpet section which included the mellifluous horn of one Harry "Sweets" Edison. Vitale's association with Thad Jones is why "Evol Deklaw Ni" -- "Love Walked In" backward -- is on the musical roster. Setting aside those couple of cuts which seemed conspicuous by their deviation from the album's norm, this is a fine effort and is highly recommended.