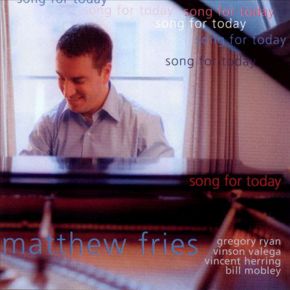 European jazz indies are valuable not only because of their willingness to document European artists who are being ignored by American labels -- they also know how to find talented American improvisers. Although Song for Today is a Swiss release, Matthew Fries is very much an American. The acoustic pianist is also one of the many Young Lions who became active on the New York jazz scene in the 1990s: Young Lions, as jazz critics call them, are Generation X musicians who have chosen straight-ahead bop and/or post-bop over fusion, jazz-pop, or jazz-funk. Young Lions aren't trying to be innovative, and no one would use that word to describeSong for Today -- a likable, if derivative, effort that was recorded in 1998 but often sounds like it could have been recorded in the 1960s. Fries' specialty is 1960s-minded post-bop, and his clean style of pianism owes a lot to Ahmad Jamal, Bill Evans, and Herbie Hancock -- not Hancock's fusion output of the 1970s, but the acoustic post-bop he provided for Blue Note in the 1960s. To his credit, Fries wrote about half of the tunes on Song for Today, and he also deserves credit for interpreting songs that haven't been done to death in the jazz world. Instead of subjecting listeners to yet another predictable version of "Our Love Is Here to Stay," Fries applies his interpretive skills to material that ranges from Leonard Bernstein's "Lucky to Be Me" to Thad Jones' "Trey of Hearts" to James Taylor's "Fire and Rain." That 1970s soft rock favorite might seem an unlikely choice for a straight-ahead jazz session, but Fries demonstrates that "Fire and Rain" can, in fact, be transformed into acoustic post-bop. Song for Today isn't mind-blowing, but it's a decent debut from a Young Lion who isn't without potential.