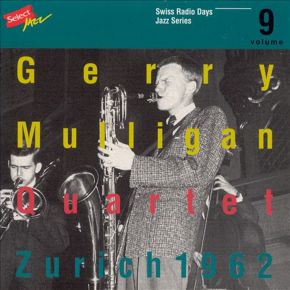 The early '60s were a very productive time for Gerry Mulligan, not only because of his impressive Concert Jazz Band, but also, because of various small groups that he led. One of those small groups can be heard on Zurich 1962, which finds the baritone saxophonist leading a cohesive quartet that includes Bob Brookmeyer on valve trombone, Bill Crow on acoustic bass, and Gus Johnson on drums. The quartet doesn't have a full-time pianist; instead, Mulligan and Brookmeyer share the piano duties and play it as a second instrument. Live performances of Mulligan's "Spring Is Sprung" and the standard "Darn That Dream" give listeners a rare chance to hear Mulligan on piano, while Brookmeyer plays the piano on some of the other selections. Remember: Mulligan and Brookmeyer were both horn players first and foremost, and it wasn't every day that they played the piano on stage. The concert heard on this CD was recorded in Zurich, Switzerland on October 18, 1962 and was broadcast on Swiss radio-in fact, Zurich 1962is part of the Swiss Radio Days series, which Switzerland's TCB label launched in the 1990s. The series is devoted entirely to recordings of Swiss radio broadcasts of jazz concerts. AlthoughZurich 1962 falls short of essential, it's a generally engaging CD that has a lot going for it.