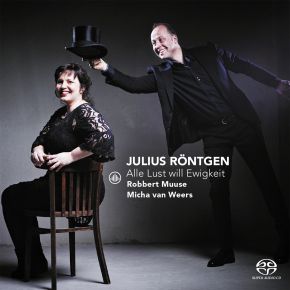 This release features the work of Julius Rontgen, a German-Dutch composer who produced a great deal of classical repertoire. The composer’s grandson wrote of this release, “This deliberate selection from Julius Rontgen’s extensive song repertoire represents an important new step towards a revaluation of his total oeuvre and the unlocking of Dutch musical heritage in general…” (Jurriaan Rontgen) Robbert Muuse and Micha van Weers are passionate musicians who are constantly pushing themselves to explore the field of forgotten works. Muuse is a baritone who is frequently sought after for both operatic and concert repertoire. Pianist Micha van Weers has performed alongside Muuse for many recitals.

Micha van Weers (featured)More information
01-09-2016
""Muuse and Van Weers took up the challenge and they do so with taste, courage and confidence.""
02-07-2016 De Gelderlander
"''When listening to this recital, you are automatically hoping for a follow-up album. Robbert, Micha and Challenge: please go for it!''"