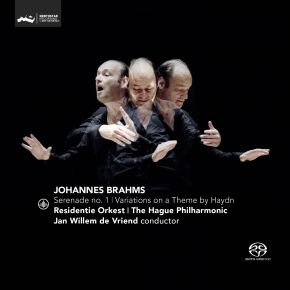 Serenade no. 1 / Variations on a Theme by Haydn

In today's world, one often perceives a division between art and academia, and composers and musicologists generally don't have much to say to one another. But that division has not always existed. Brahms himself was surrounded by a circle of academics who for him were also a source of animated comradeship. With some of them, Brahms would go on long walks outside Vienna and even on summer holidays. The men enjoyed long and sometimes loud, discussions about their shared obsessions, discoveries and findings. Brahms had these very discussions to thank for his lifelong interest in 'early music'. He even collaborated intensively on the critical editions of Couperin, Handel and Bach's sons and received interesting and useful advice form his friends. Since adopting a new artistic profile, The Hague Philharmonic is demonstrating more than ever that symphonic music can still be meaningful to large and diverse audiences in the 21st century. The ensemble performs regularly at various major concert halls around the world. Their ambitions are spreaheaded by a proactive education policy and are the driving force behind music education in the region.

Residentie Orkest The Hague (orchestra)More information
05-12-2016 Stereophile
"The richness and breadth of the multichannel sound is beyond question.
"