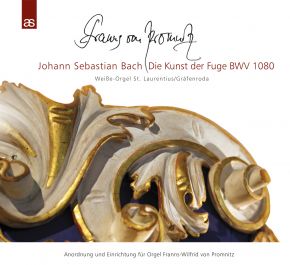 The Art of Fugue

As the art of the fugue was not appreciated, and it must be immediately acknowledged that the arrangement of this 'Opus ultimum' of Bach's musical history must be immediately acknowledged, a recomposition became due in turn and the premiere of my organ version took place in 2013 in Ahlbeck. True to the principle 'Symmetry is the order of the stupid' - J. Cocteau As a three year old, Franns von Promnitzau was captivated by musical instrument: The water organ in the Hamburg garden Planten un Blomne. At thirteen, he was a choir boy in the Drener Kreuzchor and at twenty-three, he made his debut as a conductor with the Sachsische Staatsoper Dreen. Promnitzau studied conducting, piano, composition, organ, singing and cello. He gave concerts in Paris, Brussels, Amsterdam, Budapest, Rome and London.